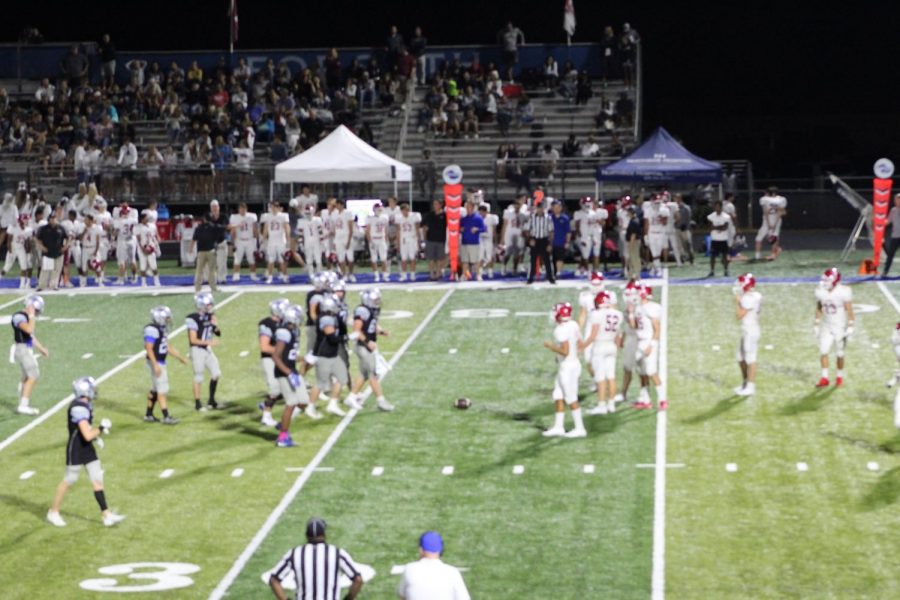 Teamwork makes the dream work. South Forsyth War Eagles work together in an attempt to defeat their rival team, the infamous Lambert Longhorns on the final day of Homecoming week.

South victory adds the final spark to the “Enchanted” evening

The eventful evening began with the marching bands from Lakeside and South Middle School joining the South High School marching band to play “Fight Song”. Two of South’s choirs then sang the National Anthem while brightly showing off school colors, the theme for the evening, and the rivalry game began.

Lambert Longhorns won the coin toss, beginning the homecoming game on offense. Morris started his night causing a fumble, but Lambert quickly recovered. The Longhorns punted the ball to the Eagles 38-yard line. The War Eagles were not able to carry the ball far and were soon on their fourth down. Deciding to go for it, Thompson ran for a first down and moved the ball to midfield. Green busted through defense and scored the first touchdown of the evening. With the two-point conversion good, South led 8-0 with 4:53 left in the first quarter. Soon after, Lambert tore down the field 53 yards and into the end zone scoring their touchdown. South reached the end zone minutes later but is intercepted. The first quarter ended with South up 8-7.

The second quarter opened with a sack executed by Hilton. War Eagles rushed into the end zone for their second touchdown; 15-7. Lambert punted the ball away giving it to South at the Longhorn 45 line. They moved the ball down but end up punting it to Lambert. The Longhorns went for the field goal with little time left in the half. South made the final score of the half, leading 21-10.

The treat of the evening happened during halftime. South students and faculty sat on the edge of their seats, waiting for the announcements. All the Homecoming festivities and spirit week led up to this point, the homecoming court was finally announced, the King and Queen proclaimed. The freshmen on Homecoming court were Macie Brinkerhoff and David Kim.  Susana Yonk and Mason Cooper represented the sophomores. The juniors were Gia Lure and Chan Baik. Then came the moment South students had been waiting all week for: Senior Homecoming candidates. Called to the football field were 6 girls and 6 boys who each received the maximum votes from students at South. The guys on court included Parker Futch, Evan Specker, Logan Leavy, Nathan Miller, Aaditya Vashisht, and Brett Morlanne. The girls were Presley Ross, Peyton White, Sarah Hicks, Olivia Bowen, Kate Waller, and Reese Hammond. South students and faculty cheered as Sarah Hicks and Brett Morlanne were crowned Homecoming King and Queen.

The faculty King and Queen were also crowned on the 50-yard line. Dra. Green and Mr. Weber shared a few moments of love with their students.

“My first reaction was like, uhhhh, you know? Like I didn’t expect it,” Mr. Weber said. “I was very excited though at the same time because when students do something like that for you it feels great.”

The love for the students who nominated the two also rubbed off on Dra. Green who said, “I felt loved! I don’t know how else to explain it. In the back of my head was, ‘this isn’t my crown, it’s the crown of all my students, all the princes and princesses that voted for me.’ I took my crown off and shared it with my whole class and said, that’s yours. I felt the love of all my kids and I blew them kisses and felt special because they made me feel special.”

The clock for half time ran down as all the Queens and Kings and nominees walked off the football field, exchanging places with the football players that ran back on for the third quarter of the rivalry game. The War Eagles continued.

Lambert began on their 20-yard line, finding some room to squeeze into the red zone but ended up kicking a field goal on 4th and 8.  South, given the chance to score another touchdown, Slott threw the ball to Schurr who swiftly ran into the end zone, which led South to a score of 28-10. The third quarter ended 28-10 South.

At the start of the final quarter, South and Lambert fans were invited to turn on their flashlights and all light posts were turned off for a few moments of War Eagle fun. The first play gave South a touchdown and roars of applause from loyal fans. With all points good, the team led against the Longhorns 34-10. Lambert immediately converted and scored their turn of 7 points. After an injury timeout called by the rival team, South ran another touchdown, increasing their score to 41-17 with 2:27 left in the game. The clock ticked out as Lambert made a failed and final attempt to score 14 yards away from the end zone.

South not only won another football game against their number one rival but did so on homecoming week. The War Eagles were safe from the Longhorn’s grasp for another year. Students and staff cheered and left with smiles on their faces, excited for the next big event: an Enchanted Homecoming dance.