Point-counterpoint: Promposals, the next big thing? 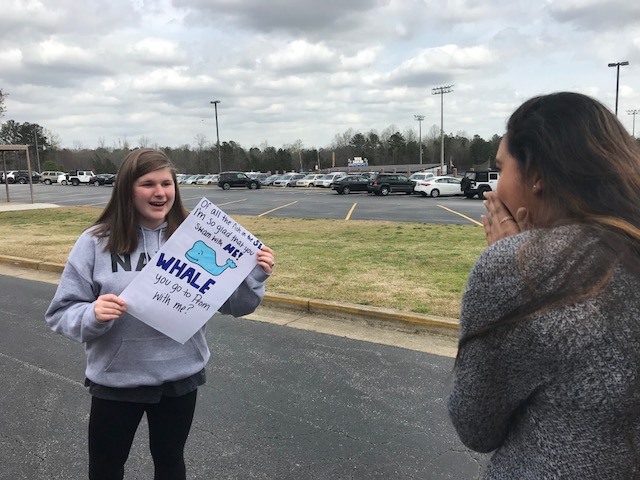 Lucy Taylor, left, asks Anvitha Bommineni, right, to Prom through a promposal saying "Of all the fish in the sea, I'm so glad you swam with me. Whale you go to prom with me?"

Point-counterpoint: Promposals, the next big thing

Prom is just around the corner and promposals have begun. Every once in a while, crowds of students gather in the hallways to witness witty and cute promposals. Guys sometimes hold up posters with puns, while others bring balloons and throw confetti upon popping the big question. Some girls wonder what kind of promposal their boyfriend, best friend, or crush will give or get.

Promposals are one thing students at South are accustomed to. Every March and April, guys and girls at South find a date for the dance of the year, prom. However, not many know the origin of this highly thought tradition.

Sophomore Megan Reynolds coneys her thoughts saying, “I think some punny guy went out one day and asked someone to prom in a really great way and then people started thinking ‘wow, this guy is a genius’.”

Ever since one student decided to ask their girlfriend to prom over a school loudspeaker, promposals have been a hit. Boys everywhere began asking their dates to prom by creating posters and billboard signs with balloons and flowers as accessories. In 2011, these extravagant prom invitations were granted their official name: promposals.

These promposals require work and effort which can easily cause stress and loss of sleep. However, imagine receiving something that is so full of love and kindness as a promposal. For just a few hours a year, you can make a girl or guy feel special by planning a promposal for them.

“Putting the time and effort into doing something like this for someone else is pretty special,” freshman Kenna Palmer said. “This doesn’t mean that you are together together, it is just something nice to do.”

According to a poll conducted by The Bird Feed, 40% of people asked to prom feel obligated to say yes and 20% say they would not feel obligated. While being asked to prom is a big deal for most students, timid and shy people may not appreciate something that is overly extravagant. Something that is small, simplistic, and straight from the heart may be a better choice. This being said, promposals are meant to be embarrassing in some regard junior Tyler Palmer said.

While some of these promposals may be ‘extra’, the cost can be easily be significantly reduced. Instead of purchasing the most expensive brand of makeup to impress a girl, perhaps buy a cheaper brand or some roses or balloons.

“It is really cool to see what people can come up with and how creative they can be,” senior Jared Honey said.

The more creative a promposal is, the more likely the date is to feel special.

“I don’t think a lot of people go hugely all out or anything,” junior Monica Lichtenwalner explained, “but a cute poster or something would be great and cute. All out would be in front of the school, and that is a little over the top.”

Creative promposals can make the actual day of prom that much more exhilarating. As Palmer says, “Promposals are a good way to interact and show you care and how you feel about them. I think anyone and everyone should do it via promposals. Promposals depend on the person. If you are a go big or go home kind of person and you know the other person likes that kind of stuff, then yes, go all out. It is your promposal to ask.” 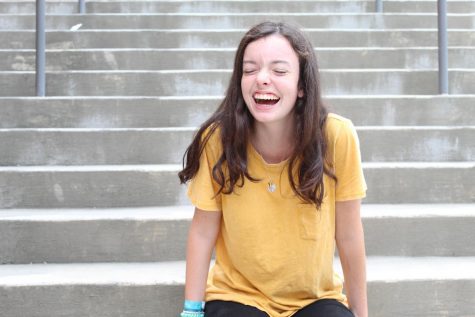 Sierra Wamsley, Editor-in-Chief
Sierra Wamsley is a senior at South Forsyth High School. She is beyond thrilled for her fourth year on The Bird Feed staff. You can often find Sierra splashing in the pool or writing a new story. She will be continuing on the South Forsyth Swim and Dive Team for the fourth year. She’ll always have a big smile on her face and a positive attitude. Sierra spends the majority of her free time engaged in music. She is usually jamming out to pop music with her brothers in the car. One item that has always been on her bucket list for the future is visiting Greenland. You can reach Sierra on Twitter at @wamsley_sierra or email her at [email protected]. 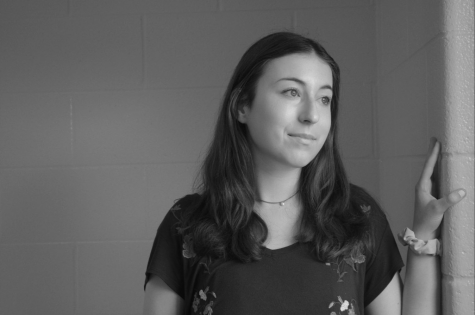 Alyssa Freyman, Editor-in-chief
Alyssa Freyman is a senior and is joining the journalism staff for her third year. You can usually catch her at a local bookstore or coffee shop, getting her caffeine fix. In her spare time, she enjoys jamming out to Coldplay and 70's and 80's rock or watching Netflix. Her latest binge-watch is That 70’s Show, and she is currently re-watching Parks and Rec. She believes that Disney movies are always a good idea. Alyssa is currently a member of DECA, National Honors Society (NHS), National English Honors Society (NEHS), and National Latin Honors Society (NLHS). She loves to laugh (mostly at her own jokes). Her friends would describe her as adventurous; she likes to go zip-lining and rock-climbing. Don’t ask her what her favorite book is; she loves them all. She enjoys taking photography, filming, traveling, and cheering on the Chicago Cubs. You can contact her at [email protected].
Leave a Comment 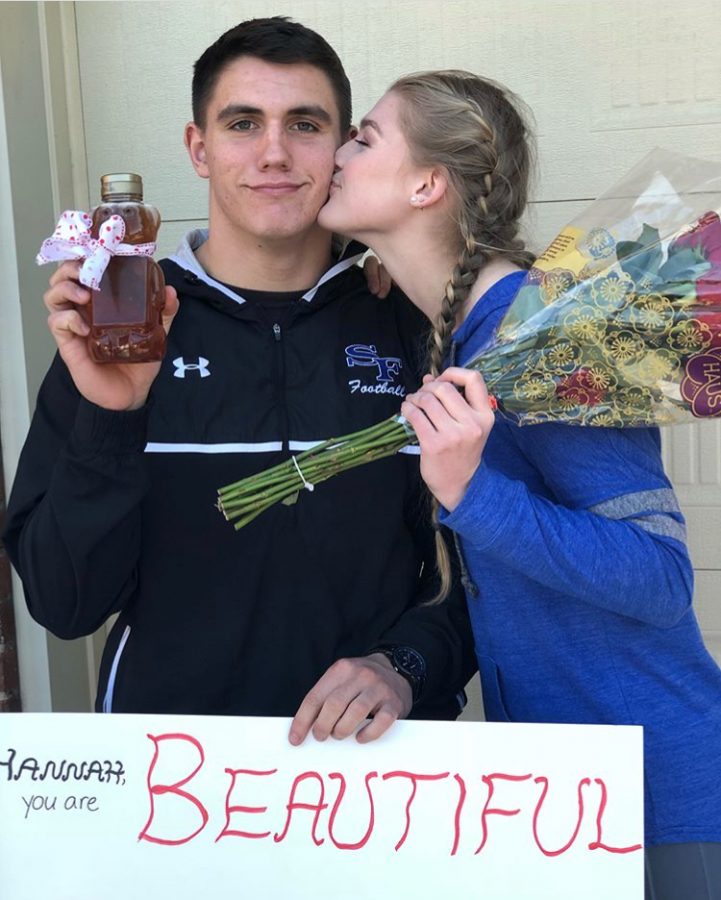 Jared Honey poses for a picture with his date to prom, Hannah Hausler. He asked her on her birthday, which made the day extra special to remember. The two have been dating for a year and are excited to go to prom together for the second time.

Point Counterpoint: Extravagant promposals are not worth the expense

In 2001, the first promposal was recorded. Two students had asked girls to prom over the school loudspeaker while singing an edited version of “The Wedding Singer”. Since then, promposals became the popular way to ask other people to prom. Promposals have become more extravagant since 2001. Rose petals, billboards, and announcements made by airplanes have all been themes of recent promposals. Nearly two decades after the first promposal, many students wonder about what happened to a simple invitation to prom.

Although promposals can be flattering, they can also make shy people feel uncomfortable. A guy or girl who works tirelessly to make a proposal perfect can intimidate the individual being asked and force them to accept the invitation to avoid an awkward situation. 45% of students surveyed said that they would feel obligated to say yes to a big promposal, while 20% said they would not.

Jared Honey, a well-known senior football player, planned a promposal for his girlfriend, Hannah Hausler. He wrote on a poster “Hannah, you are beautiful and Honey is sweet. Together, Prom part 2 would be quite a treat.” Although this promposal was not effort intensive, it made Hannah’s day extra special. “I think it’s more sentimental and more from the heart than by buying or doing something really extravagant for somebody,” said senior Hannah Hausler, “I liked it more.”

This was the effect Jared was hoping his promposal would have on Hannah. “I thought it would be a good idea. I had the thought in mind, and I’m a real punny guy. I can make good puns and I do have artistic ability so I thought I could write it out and do something cute for her,” said senior Jared Honey. “We’ve been dating for over a year, so I didn’t think doing something too big would be truly necessary. I thought she would appreciate the poster since it was her birthday, so it’s something she could hold onto forever.”

Promposals can also be expensive. In a survey taken in 2016 by Seventeen magazine, “Northeastern families will spend an average of $431 on promposals […], Western families will spend an average of $342 on promposals […], Southern families will spend an average of $305 on promposals […], and Midwestern families will spend an average of $218 on promposals.” That doesn’t include the cost of prom night. Students may encounter the uncertainty of spending so much money when there is a possibility that the person may refuse. One boyfriend surprised his girlfriend with a trip to Hawaii, on the condition that she said yes. That trip cost the boyfriend thousands of dollars for a date to prom. Expensive promposals don’t always end happily ever after. One New Jersey teen asked a girl to prom during a track meet. She had to reject him in front of the entire school because she already had a date to Prom. If you are considering a promposal, do it in a private, or someplace where that special someone will not feel obligated to say “yes”. Take it from Daniel Peta, a YouTuber who set up signs along a roadway and drove his girlfriend by them. The girlfriend said she felt that it was a dumb way to ask someone to prom, but then quickly apologized when she realized the promposal was meant for her. A poster with a cute pun will set you back $5; not bad considering the alternative. A cheaper option is to spell out “Prom?” in food. Your date will have a cute promposal to remember and it will function as a tasty snack for you both to share. The more creative your promposal is, and the more sound it is for your wallet, the better.

I am not saying that I’m against the idea of a promposal. Promposals are a great way to ask someone to prom. It’s only the flamboyant ones that I’m against. Promposals have become commercialized on social media, which pressures people into doing something huge to impress their prospective crush. 80% of those surveyed at South said they would prefer a small promposal instead of a complex one. So remember, small promposals can be just as memorable as extravagant and expensive ones.

Alyssa Freyman, Editor-in-chief
Alyssa Freyman is a senior and is joining the journalism staff for her third year. You can usually catch her at a local bookstore or coffee shop, getting her caffeine fix. In her spare time, she enjoys jamming out to Coldplay and 70's and 80's rock or watching Netflix. Her latest binge-watch is That 70’s Show, and she is currently re-watching Parks and Rec. She believes that Disney movies are always a good idea. Alyssa is currently a member of DECA, National Honors Society (NHS), National English Honors Society (NEHS), and National Latin Honors Society (NLHS). She loves to laugh (mostly at her own jokes). Her friends would describe her as adventurous; she likes to go zip-lining and rock-climbing. Don’t ask her what her favorite book is; she loves them all. She enjoys taking photography, filming, traveling, and cheering on the Chicago Cubs. You can contact her at [email protected].
Leave a Comment