Students gather in different areas of the school, each place matching a certain need of the student. Some utilize the quietness of the Blue Gym to study for their next test, while others stay in the Arena for some free time with friends. The cafeteria offers a nice in-between, giving students the opportunity to study and work on assignments while also being surrounded by friends. This new system during IF, called Flex time, was tested out for the first time on Nov. 28th, and may become a part of the schedule for the next school year. 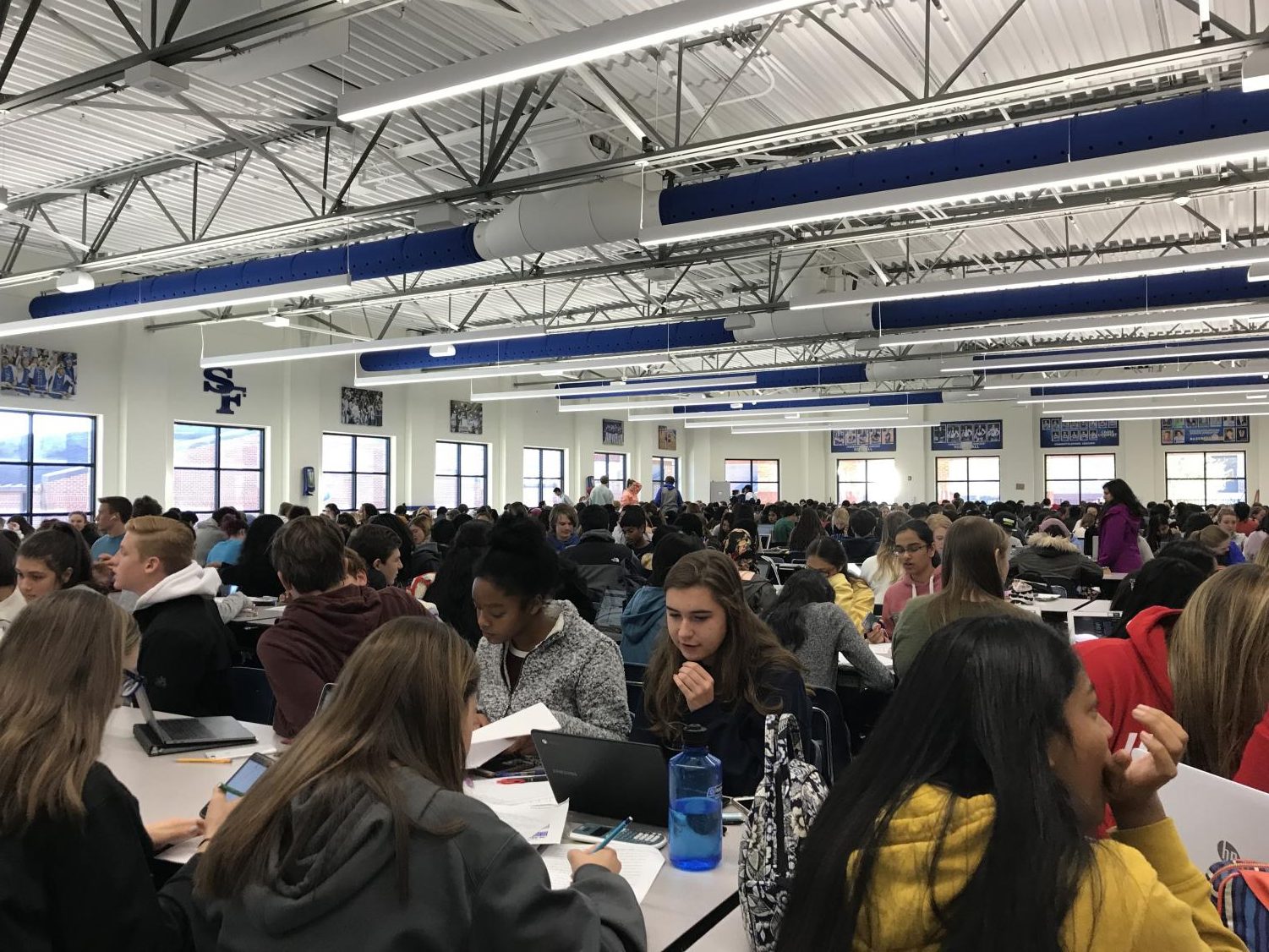 Students at work. Students collaborate on assignments in the cafeteria, while also being surrounded by their friends. The school is trying a new system, called Flex time, which gives students the opportunity to work in different environments that fit their needs. “I like it (Flex) because I get to see my friends that aren’t in my IF class and work on stuff,” stated senior Madelyn Barron. “I think it would work fine. It is a little crowded, but I like the set up of it. (I would) maybe just have more places for people to meet instead of 3. I know it’s hard for teachers, but having everyone in three places makes it a little crowded.”

As students stampede into the Arena with backpacks slung over their shoulders, the distinct sound of chatter and hustle could be heard, gradually increasing until every student had found a seat for themselves and a few friends. Some students choose to discuss their weekend plans, while others complained about future tests and quizzes they will face. The students finish their leftover work, and gather with each other to engage in conversation, as they had nothing better to do. The Arena served as a place for all students to gather and spend time with friends, without the stress of teachers or homework on their mind.

“I think the Arena time was a good break for us amongst all the stress,” says freshman Siya Kumar. “It was fun, and I got to meet with friends that I don’t have any classes with.”

With students flooding the halls of the school, each person appeared desperate to join their friends, and reach a destination to study and work. In search of a serene atmosphere, a decent amount of students hustled into the Blue Gym – with relieved expressions on their faces that they finally found a suited study space. The new Flex System required students either pick the Arena, Cafe, or Blue Gym. Some students found respite from the bustling Arena or Cafeteria in the Blue Gym.

“This system was probably created as a better way to organize students so that each individual has a better environment to study. To me, it doesn’t make a difference,” said sophomore Kristine Yin.

In the Blue Gym, students seemed relaxed, as if they were in their own world, not bothered by anyone. There was enough space for every student in the gym to have their own comfortable bubble so that they could relax and study. Even though the swarm of people walking into the gym seemed chaotic at first, the bleachers provided enough room for everyone and made the area feel peaceful. Personally, working in the Blue Gym was a relief because the place wasn’t noisy and chaotic at all, and it allowed you to be productive.

“Flex time was good and I was productive and got a lot of stuff done,” said sophomore Brinley Bramwell.“It will affect my school career because it gives me more time to study and be productive, so I will get higher grades.”

In the cafeteria, students rushed in to see the best of both worlds, studying and talking with friends. After the initial rush of students, there was quiet chatter as they started getting to work. Working collaboratively with their peers, students could focus on homework but still have fun socializing. Many people took advantage of the opportunity and quizzed each other, worked together on projects and got caught up.

I enjoyed this trial run of Flex, because I definitely prefer the independence and responsibility that it gives us as students over the normality of IF. The freedom given to organize our own study groups make Flex more enjoyable than the original independent study.”

Most of these students wanted to be productive, but still have an enjoyable time and a little rest. The only negative thing students had to say was that all the noise and crowd detracted a bit from homework. The biggest suggestion was to have more places to work instead of just three.

“I like it (Flex) because I get to see my friends that aren’t in my IF class and work on stuff. I think it would work fine. It is a little crowded, but I like the set up of it,” said senior Madelyn Barron. “(I would) maybe just have more places for people to meet instead of 3. I know it’s hard for teachers, but having everyone in three places makes it a little crowded.”

Alexis Klosterman, a freshman at South, had a liking for the new addition to the schedule, but the decision hasn’t been finalized for the school year yet.

“I think it could be a good idea for students to relax and have fun during the school day, but also catch up on work,” Klosterman added. “It’s good, but a little crazy because it’s extremely crowded in the cafeteria. People are trying to from place to place all at one time.”

While students have varying opinions on how this Flex schedule went, since it is a change from their regular schedule, it will be interesting to see how South Forsyth Administrators will adjust and experiment to find the most beneficial schedule for students.

We place an emphasis on objective news, but The Bird Feed does have a character that represents our staff which we will present occasionally. We also give significance to multimedia and believe that it is vital to maintaining a diverse and engaging news site.
Daria Weber, Copy Editor
Daria Weber is a Senior at South Forsyth, marking her fourth year on The Bird Feed staff. A proud Venture Scout, Daria is the current president of Crew 1109, president of the NEGA Venturing Officers Association, and works at Camp Rainey Mountain. Although Daria is often busy with school-work, she will always find time to enjoy a good book. Daria’s goal is to bring out the best of The Bird Feed and enjoy her last year on staff.

You can reach Daria at:

@dariabirdfeed
Kayleigh Emberton, Senior Editor
Kayleigh Emberton is the Senior Editor of the BirdFeed. Kayleigh is in her fourth year of journalism and could not be more excited. Kayleigh loves sports, especially baseball and football. Kayleigh is a die-hard fan of the Atlanta Braves and Indianapolis Colts. She loves the beach, camping, hiking, and other outdoor activities. When she isn’t outside, she is listening to music and dancing around the house. Kayleigh loves the feeling of adrenaline, so she enjoys action and horror movies; but every once in a while, a Disney movie really sets the mood. Her love for action, adventure, and helping people, sets her on the path of becoming a K-9 cop. You can contact her via twitter @KayBirdFeed or her email [email protected].
Elijah Cho, Opinions Section Editor
Elijah Cho is a sophomore in South Forsyth High School and is very grateful to be able to be in the Journalism group once again. Despite deciding to fully focus on academics instead of joining marching band this year, he’s still doing his best to push through the difficult classes in his second year like AP World History. He loves to write short stories in his free time while listening to video game and anime soundtracks like Professor Layton or Undertale (when he’s not too busy obsessing over character design or plot development). Either that, or you’ll simply find him watching Psych, Youtube, or anime. As you can probably already tell, he’s an enthusiast for music of many kinds, whether he’s listening to 80’s music, metal, classical, or playing the piano or trumpet. As this is his second year of high school, he hopes to be able to have more new experiences including Mock Trial. Although this is his first year in Journalism as the Opinion Sections Editor, he hopes he will be able to write many good Opinion articles and be a good contribute to the team and its newcomers. Check him out on Twitter @TheCho_senOne or contact him at [email protected].