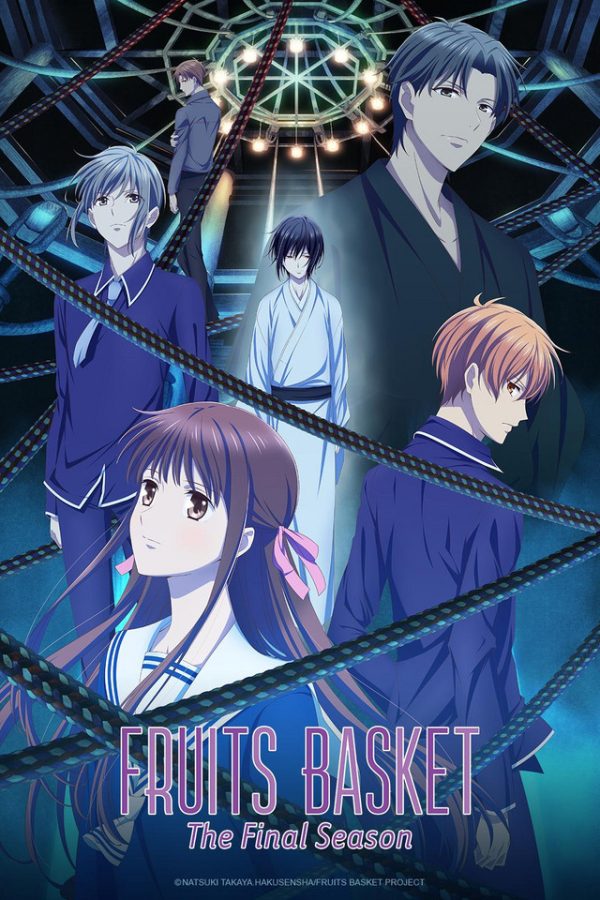 Are you looking for a good message about family and friendships? Or are you just trying to find something to make you cry? Either way, here are a few anime series that will make you feel all sorts of emotions while also dealing with tough topics such as mental illness, grief and trauma.

The found family trope is a trope in pop culture where a character, usually an orphan, meets extremely loyal friends who act as a replacement for their lack of family. Fruits Basket (2019) is an anime series where a kind-hearted girl brings together an unlikely group of people to form their own “found family”.

Video used with permission from Crunchyroll Collection under fair use

Fruits Basket (2019) illustrates the tragic fate of the Sohma clan as they attempt to navigate life while under the Zodiac Curse: a curse that attaches all thirteen members to Akito, the rebirthed god in the Chinese zodiac myth. All fourteen characters are fated to live together for eternity, unmoving and unchanging until they die.

But when the ditzy but loveable orphan, Tohru Honda, enters into their lives, the cursed members begin to search for hope amidst their inevitable demise. As Tohru’s attachment to the family grows, she is also determined to find the answer of how to break the curse.

This 3-season drama will have you laughing and crying all in the same episode, and Fruits Basket (2019) is a binge-worthy show through and through. Not only is it a good drama, but it is a great romance and has fantastical elements as well.

Anohana: The Flower We Saw That Day

For many of you, you’ve drifted away from your friends from elementary or even middle school. After all, it’s a normal part of life to grow up and grow away from people. Anohana: The Flower We Saw That Day explores this concept while dealing with grief and various mental illnesses.

The anime is about a close group of 11-year-old kids who drift apart when one of the kids, Meiko “Menma” Honma, dies in a tragic incident. Five years later, the rest of the group has long parted ways, but they still hold the burdens from Menma’s incident.

But on one random summer day, the ghost of a 16-year-old Menma appears before Jinta Yadomi, the former leader of their group. As Jinta believes he’s hallucinating, Menma claims that her “wish must be granted” for her to finally rest. However, since Menma does not remember this “wish”, the two decide to bring the group back together, so she can rest.

Anohana is heart-warming, adventurous and teaches lessons about growing up. What’s even better is that this coming-of-age drama is only 11 episodes long, the shortest anime on this list, and you can finish it in one long night. Just don’t forget to keep a box of tissues nearby at all times.

As with the other anime series in this genre, Violet Evergarden also deals with mental illnesses but to a far greater extent than the rest. It takes place after a war, and the titular character, Violet Evergarden, has to deal with the burdens of her Post-Traumatic Stress Disorder (PTSD) while adjusting to her new life after the war.

Video used with permission from Netflix Anime under fair use

In the fictional region of Leidenschaftlich, which is heavily inspired by Germany, the occupation of the Auto Memory Doll became popular during the war. Customers hired Auto Memory Dolls to write for them, but they most commonly wrote letters.

After the war, ex-soldier Violet Evergarden becomes an Auto Memory Doll to reintegrate into society. However, because she joined the war at a very young age, Violet has trouble understanding emotions, especially her own. She becomes an Auto Memory Doll and writes letters for others in order to search for her purpose in life and to fully grasp empathy, love and sorrow.

Violet Evergarden is a personal favorite of mine, and it manages to effectively handle sensitive topics while telling a beautiful story. Not only is the story well-paced and elegantly written, but also the art style and the original soundtrack truly encapsulate the magnificence that is seen in this show. After the 13 episodes, there are also two movies that further the plot of the series.

Your Lie in April

Classical music, generational trauma and romance all in one 23-episode anime series? Say less. Your Lie in April intertwines the beauty of the piano and violin with the true meaning of friendship as two unlikely musicians come together and share their love for classical music.

When piano prodigy Kousei Arima experiences the tragedy of his mother’s death, Kousei can no longer hear the sound of the piano and withdraws himself from competing and performing in piano recitals. Two years pass and Kousei is still a recluse teenager, living in solitude and staying far away from music.

However, his world turns upside down when he has a fateful encounter with Kaori Miyazono, a beautiful violinist who goes to his school. Throughout the series, Kaori teaches him how to love music again, and the two form an unbreakable bond through their love of performing.

Kousei and Kaori have one of the most genuine relationships in all of anime. And all of the characters in the show reflect characters in real life that may be a part of your own life. Overall, this 22-episode series is real, raw and deals with depression and grief.

Carole & Tuesday is unlike the other drama anime series and that’s why it’s last on this list. Carole & Tuesday explores themes of family, friendship, sexuality, addiction—and the best part is that it’s futuristic and takes place on Mars.

Video used with permission from Netflix Anime under fair use

It’s been 50 years since humans began to colonize Mars. Humans live in a world where Artificial Intelligence (AI) and advanced technology do everything for them. AI controls restaurants, transportation, political figures and even the music industry.

The series begins when teenager Tuesday Simmons, a daughter of an affluent politician, runs away from home to pursue her dreams of becoming a famous guitarist. That’s when she crosses paths with another aspiring musician, Carole Stanley, an orphan teenager who lives day-to-day working various odd jobs to provide for herself.

When Carole isn’t working, she takes her keyboard out on the streets to get her music out in the world. The two girls from drastically different worlds decide to join forces and become the singer-songwriter duo Carole & Tuesday.

This anime series has fun songs and even funnier scenes and episodes, but it’s all wrapped into a very heart-warming 2-season drama. Also, the art style is notably “less anime” than other series which makes the 2019 anime refreshing to watch if you’ve watched a lot of anime.