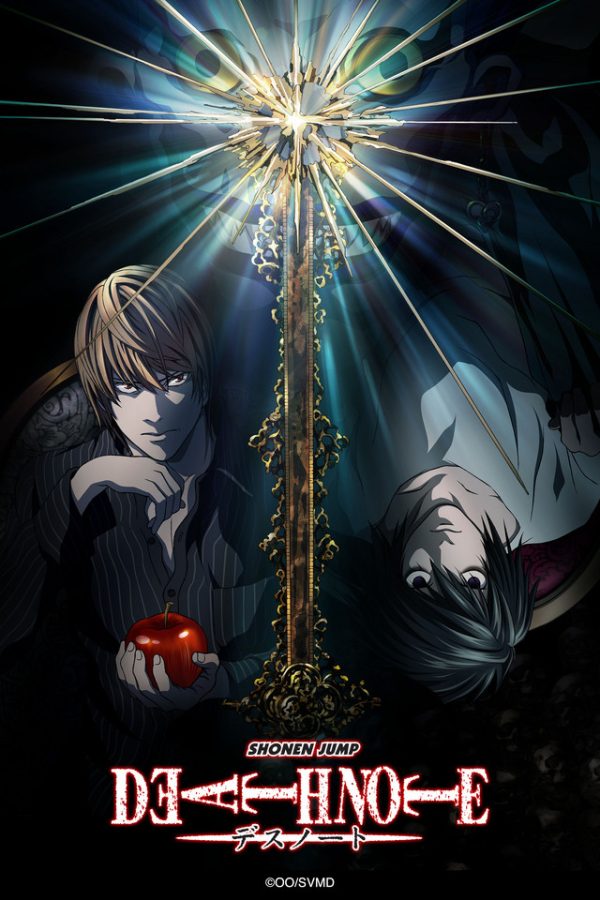 Psychological thrillers. “Death Note” is a series about a sociopathic teenager and his quest to “purify” humanity. Death Note, along with four other series, is featured on this list.

Similar to romance anime, these thrillers will have your heart racing but in a very different way. However, these next anime are not for the faintest of hearts. Be prepared for blood, gore and many, many jumpscares.

Death Note is another very critically-acclaimed anime series that many non-anime fans are familiar with as well. Death Note explores themes of Good versus Evil, the meaning of justice and how subjective morality really is. This anime series will have you questioning your morals all while making you crave a nice bag of chips.

Video used with permission from Crunchyroll Collection under fair use

Taking place in present-day Japan, genius high school student Light Yagami Stumbles upon a mysterious notebook on the way to school. With the words Death Note inscribed on the cover, Light decides to open it and sees a list of rules written on the first pages.

He finds out that this notebook can kill anyone as long as the user knows the name and the face of their target. In the Death Note, the user can write any specific cause of death for their target; and if it is not specified, the target dies of a heart attack.

With this new and powerful weapon, Light sets off on a mission to kill all the criminals in the world as he believes that those who have already revoked their rights in society should no longer be allowed to live. As these criminals begin to die suddenly and all with the same causes of death, law enforcement determines that these deaths are related and can be tied to one person.

Death Note has one of the best endings in all of anime history. Calling Death Note a roller coaster ride would be an understatement. This anime contains the funniest, saddest and scariest moments all in 37 episodes. I highly recommend this one.

Looks can be deceiving, and this anime is the epitome of don’t judge a book by its cover. Upon glancing at the cover and reading the name, it seems like a children’s show with cutesy magical girls similar to Sailor Moon. But Puella Magi Madoka Magica (PMMM) is far more than just glitter and magic.

The story begins with an airheaded eighth-grader named Madoka Kaname who lives a seemingly normal life. She has a very loving family and a best friend named Sayaka Miki, who she walks to school with every day. However, after waking up from a rather bizarre dream, Madoka can’t shake the feeling that something in her life seems off.

Then, one day after school, Madoka and Sayaka hear a cry for help and run into a cat-like creature named Kyuubey. This magical cat offers them an attractive proposition as a reward for helping him: he will grant their greatest wish; but in return, they will have to assume the position of a magical girl and fight off witches. However, this deal isn’t at all what it seems.

This show has everything needed for a good psychological thriller. It’s dark, twisted and grim all covered in a veneer of rainbows and butterflies. If you watched Sailor Moon, Glitter Force or even Winx growing up, PMMM is an interesting play on the magical girl trope, and you might enjoy this darker take on the genre.

Erased has the thrills of horror anime series, but it also has the suspense of a mystery and the imaginative elements of fantasy. There are many things I love about this anime from the scarier scenes to the more wholesome ones, but I think the best part about this anime is how Kei Sanbe seamlessly incorporated time travel in this dark and grim anime.

29-year-old Satoru Fujinuma is a young man with a peculiar, yet life-changing gift: whenever tragedy is about to occur, Satoru involuntarily time travels to moments before the tragedy strikes. In the meager time he is given, Satoru has to find out what went wrong to “fix” the accident and save any potential lives that would’ve been lost.

When the tragedy hits close to home, he finds himself transported all the way back to 1988 when he is 11 years old. He soon realizes that these cryptic events from his past are connected to the calamity that he faced when he was 29-years-old. As an 11-year-old, Satoru has to try to put the pieces together and find out how to reverse his tragedy.

This 12-episode anime series is suspenseful, addicting and an overall good binge for anyone who wants a short, yet fulfilling anime they can watch in a day. There are many, many turns and plot twists that will have you at the edge of your seat. And of course, there’s no psychological thriller without your fair share of blood and death.

Eerie orphanages are the focal point of many American horror movies. I mean what’s creepier than a bunch of parentless kids and an ominous caretaker? If you’re interested in that sub-genre of horror movies, The Promised Neverland is definitely the anime series for you.

The anime sets the scene with three orphan kids, Emma, Norman and Ray as they look out into the distance, wondering what’s past the gate of the Grace Field House, the orphanage they’ve lived in for as long as they’ve remembered.

The anime time skips to many years later, and Emma, Norman and Ray are now 11 years old. They live happily at the Grace Field House with the other kids and a kind caretaker they call “mama”. Emma, Norman and Ray are the most intelligent children at the orphanage, and all three of them are about to be adopted since everyone at the orphanage gets adopted by the age of 12. They’re trying to make the most of their last year at the Grace Field House, but when five-year-old Connie gets adopted, Emma and Norman find out the secrets behind this so-called “orphanage”.

Through the art style, the soundtrack and the animation the audience is truly immersed in the suspense as they try to uncover the secrets hidden within the walls of Grace Field House. This 13-episode psychological thriller is a horror waiting to be unpacked.

Parasitism is a relationship between two species where the parasite lives within the host and harms the host to benefit its own life. In the anime series, Parasyte: The Maxim, they explore a different kind of parasitic relationship: one between an alien species and humans.

Video used with permission from maidigitv under fair use

The humans don’t know when or why they came to earth, but the aliens have an instinct for survival and the hunger for human life. These parasitic creatures take over the brains of their human hosts, and they can assume the role of their host, blending into society while feasting on human flesh and blood. They aren’t your normal parasites; they have deadly abilities that can kill in an instant. But what’s even worse is that they are intelligent creatures with reason.

One day, 17-year-old Shinichi Izumi wakes up in the middle of the night and feels the parasitic alien attempting to take over his body. When the attempt fails, the alien ends up only being able to take over Shinichi’s right hand. Shinichi and the parasite, Migi, are forced to co-exist with each other as they work together to take down parasites who want to kill them.

This sci-fi horror is full of blood and gore and I’m obsessed. While there are many psychological thriller moments, this anime series is also a drama and contains many touching moments as well. It is a must-watch if you’ve already watched Death Note and are craving something similar.