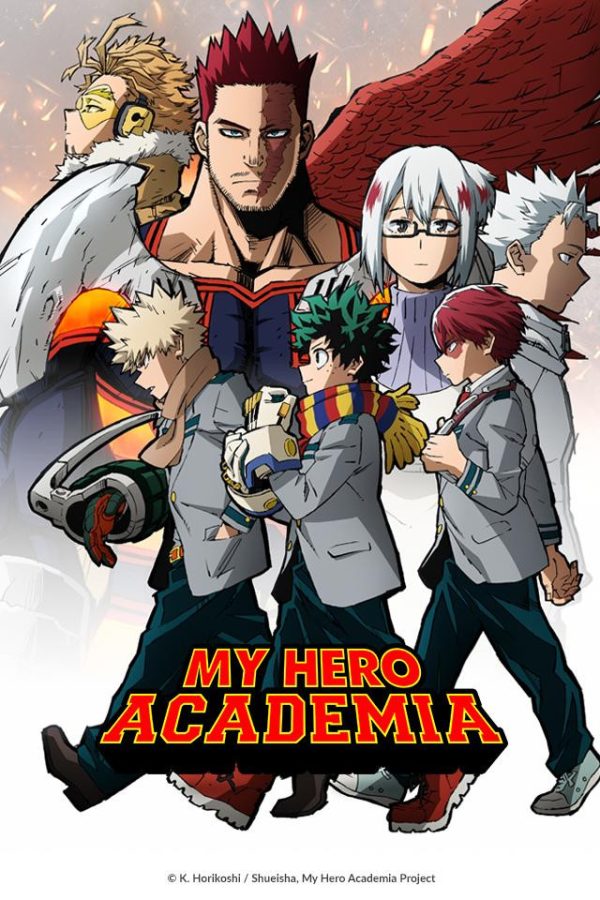 Action anime. The series, “My Hero Academia” features protagonist, Izuku Midoriya, learning how to use his newfound abilities. MHA, along with four other shows, are featured on this list.

Action anime is the epitome of how friendship triumphs all. The following series are very popular shows that have rightly gained recognition for their unique characters, fast-moving plots and eye-catching animation.

If you’ve been on TikTok for a while, but you haven’t heard of My Hero Academia (MHA), then you are not scrolling long enough. My Hero Academia by far has the most abundant presence on social media through cosplay, fanfiction, and merchandise.

My Hero Academia illustrates a world where humans have evolved to have powers known as quirks when they are born. With this new evolution, the occupation of heroes emerged in society as some individuals began to abuse their quirks for evil.

The anime follows young Izuku Midoriya, a quirkless teenager who has a lifelong dream of being a hero, despite not having any powers. When fate interlocks young Midoriya with Japan’s number one hero, All Might, his life changes forever.

Kohei Horikoshi packs this shonen with action, drama, and the importance of friendship. MHA is a great first anime for those who are looking for classic fighting scenes and unique characters. It is also still an ongoing series, so it’s not too late to get fully caught up with the rest of the MHA fandom.

Does the name “Killua” or “Hisoka” ring a bell? If so, you’ve probably been exposed to the anime series Hunter x Hunter (pronounced “hunter hunter”). HxH is a more mature shonen for those who aren’t afraid of a little blood and gore.

Video used with permission from vizmedia under fair use

The series takes place in a world where Hunters are the catch-all occupation to accomplish strenuous tasks such as eliminating monsters or arresting underground villain associations. Hunters receive amazing benefits, and most importantly, they make a lot of money. But in order to become a Hunter, one must overcome a grueling series of herculean tests to prove their worthiness for the job.

That’s when we meet Gon Freces, a young boy with natural agility and physical aptitude. Gon enters the Hunter Exam in search of his father, who is a well-known Hunter. There, he gains new friends as well as formidable foes throughout the test.

This anime is a great watch for those who already have a few under their belt. It has a similar flow to a basic shonen; yet, there are many aspects that make the anime stick out as one of the most critically acclaimed anime in the world.

Winning Crunchyroll’s Anime of the Year Award in 2019, it is evident that Demon Slayer is a must-watch and a strong contender for the best anime series on this list. Its beautiful and unique animation allows this shonen to stand out from many others.

Taking place in Japan’s Taisho-era, the show centers around a world where demons are creatures who feast on human blood to survive. They have superhuman abilities and little to no weaknesses, but very few humans know of their existence.

Enter Tanjiro Kamado, the eldest son and the head of the household after his father passed away years ago. The Kamado family lives deep in the mountains, so Tanjiro makes the daily trip down the mountain to fetch resources for his family. But everything changes when Tanjiro returns to his younger sister, Nezuko, transformed into a demon. To save his sister and find the cure for demons, Tanjiro trains to become a demon slayer, persevering through many quests and challenges.

Demon Slayer is set apart from other shonen since this show has a sense of beauty despite all the blood and gore. Tanjiro holds empathy and even cries for his enemies, which is not a very common trait in many shonen protagonists. On top of that, both the art style and the music are aesthetically pleasing, and they work together with the pacing of the scenes to deliver a breathtaking piece on grief and sorrow.

Masashi Kishimoto’s Naruto has become a universal icon for anime, even amongst those who have never watched a single episode in their lives. Naruto is one of the longer anime shows if you’re more of a binge-watcher. In fact, the story splits into two different series Naruto and Naruto: Shippuden. The anime consists of both long-term story developments as well as smaller arcs throughout the show.

Video used with permission from vizmedia under fair use

In the world of Naruto, ninjas, also known as “Shinobi”, run the villages. Naruto Uzumaki is an orphan raised in the “Hidden Leaf Village” who finally becomes a ninja after passing the exam. Soon, he joins Sasuke Uchiha and Sakura Haruno to form Team 7 under the guidance of Kakashi-sensei, a gray-haired elite ninja.

At the beginning of the show, this unlikely bunch goes out to complete small missions such as doing chores or being bodyguards. However, throughout the series, the mood becomes more serious as these three characters grow older and become more experienced ninjas.

This anime series is a great starter for anyone who wants to get into anime for the first time. Most of the episodes follow a simple, yet addicting format that allows the show to flow seamlessly. Unfortunately, there are a lot of filler episodes, but those can easily be avoided through filler episode lists online.

Attack on Titan’s opening theme song, “Guren no Yumiya” by Linked Horizon is the most memorable song in all of anime with its strong orchestral music that fills the audience with a sense of justice and patriotism.

However, the anime series is just as good as its opening soundtrack; which surprisingly enough, not a lot of series can say the same. The anime builds a world where the human race lives inside cities surrounded by three massive walls. No one knows where the walls came from, but no one questions them because the walls serve as protection for the humans.

The walls protect their civilization from the terrorizing Titans on the other side of the outermost wall, Wall Maria. Titans are large, humanoid creatures who seem to have only one instinct: the hunger for humans.

In the beginning, we meet young Eren Jaeger, a boy who lives in the town of Shiganshina next to Wall Maria. Eren and his friends, Mikasa and Armin, live peacefully within the small town until an unfortunate incident causes the trio to join the ranks of the Survey Corps, a branch of the military that specializes in eliminating all the Titans.

This shonen is fast-paced, serious and there are many, many plot twists throughout the show. It’s a show where I advise not to get too attached to any of the characters because their permanence is not likely. However, it’s a great series that executes themes of love, revenge and friendships effectively. With the final season releasing this winter, Attack on Titan is still surprising its fanbase with more and more twists and turns.