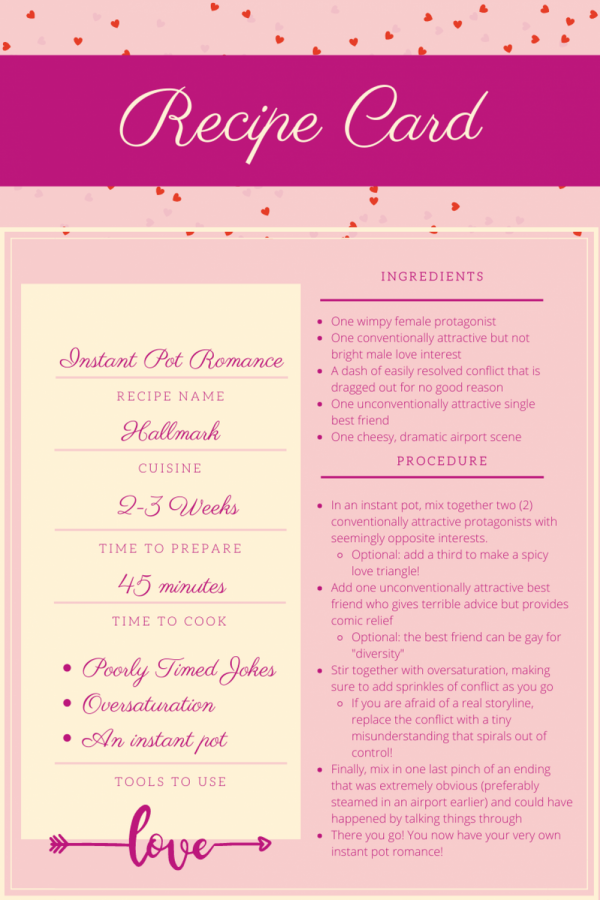 Instant-pot romance. Many films seem to have a set recipe for how their love stories unfold, promoting a one-size-fits-all narrative. This has caused problems and rifts in real-life relationships where everything isn’t so neat.

In the grand scheme of things, being sixteen and having never been kissed isn’t the worst thing in the world. Except that in the world of impressionable young teenagers, it is. Isn’t that the whole point of every Disney channel original movie and show from the 2000s onwards? From a very young age, we are fed a steady diet of romance movies and it only intensifies around Valentine’s Day. Ah yes, Valentine’s Day, the dreaded day of 2-minute love, endless roses, and instant pot romances. A day of sickeningly sweet chocolates and hearts and more cheese than Cheesecake Factory’s four-cheese pasta (the one that gives you a stomach ache on your birthday and makes you want to never be within a fifty-mile radius of pasta ever again). For a while now, the giants of the film industry such as Netflix and Hallmark have released a concerning amount of romance movies around Valentine’s Day every year without fail. With all the movies they release, one would think they’d get tired of the same old plots with the same old characters, but no. Movies like The Kissing Booth get renewed for sequels and trilogies while the Percy Jackson fandom is still begging for something, anything. Honestly, as much as the lack of characterization and plot development bothers me, it’s not the biggest issue I have with rom-coms. While the meek female protagonists and glaring plot holes are irksome, the messages these movies convey are the real issue.

Rom-coms perpetuate the idea that love can only be one way. It’s always stomach butterflies and witty banter. The female protagonists are often tall, but not too tall, curvy, but not too curvy, and introverted, but not too introverted. Male protagonists tend to be tall, muscular, athletic, and not the smartest. They promote conventional beauty standards by essentially putting real-life Disney princes and princesses on a pedestal. Not to mention, the single best friend is typically made fun of for something, whether it be race, sexuality, or fashion sense. Most of the time, there’s a mean blonde for conflict. None of the characters have real substance; all of them seem to have one personality trait or latch onto stereotypes instead of layers and depths. These people are used as props rather than humans in order to further the love story, making the focus all about the relationship instead of how the individuals grew and blossomed together because of it. This can make people think their romantic relationships are supposed to work the same way, with more focus on keeping the relationship alive than making sure they’re happy.

While rom-coms are supposed to be comedic through their use of stereotypes, it often reads as just a lack of effort on the writers’ part in making the characters relatable and having realistic problems. A stunning lack of communication is the cause for every single conflict in every single romance movie ever made; everything is based on easily conciliable misunderstandings that get blown out of proportion. It should come as no surprise, then, that it only takes two to three weeks to produce a Hallmark movie. Compare this to the two-ish years that the average Hollywood movie takes and it’s really a wonder that Hallmark movies have any semblance of a plot at all. This wouldn’t be concerning on the surface level, but these movies are often portrayed as representations of “goals” or ideal relationships, and they can misconstrue the idea of true love for many people, which is concerning.

Furthermore, rom-coms actually harm relationships. A lack of communication is the cause of every conflict in every rom-com. According to a BBC article, the inability to communicate displayed on-screen leads many people to believe that the right person will just know what they want, without any communication involved. This, of course, becomes the downfall of many relationships. Good relationships, romantic or not, require a lot of communication to thrive, yet we never see this on the big screen because entertainment takes precedence. With several studies proving that movies do actually influence people’s behavior in everyday scenarios, these films could do the bare minimum in making their characters actually represent the people they’re supposed to be portraying; instead, cheesy lines and unrealistic scenarios take over.

This Valentine’s Day, instead of sprawling on the couch and crying to whatever half-baked plot Hallmark’s newest movie has, try some of these:

Video used from youtube.com under Fair Use

This movie was based on Jane Austen’s brilliant novel. Elizabeth Bennet and Mr. Darcy didn’t fall in love overnight. Actually, they hated each other at first. It took time for them to trust each other and let each other in. Mr. Darcy was arrogant and rude at first but he grew as a person throughout the course of the movie and changed into someone kind and considerate. The main conflict here isn’t the result of a lack of communication, but rather character growth that then developed into love.

Video used from youtube.com under Fair Use.

The 2018 film was based on Kevin Kwan’s novel. The story takes place in Singapore and follows the struggles of Rachel Chu (Constance Wu) as she tries to gain the acceptance of her boyfriend’s very wealthy family. Her boyfriend, Nick Young(Henry Golding), is visiting for his best friend’s wedding and Rachel finds it difficult to fit in with the Young family’s lavish lifestyle. The movie, and the book, explore real struggles in real relationships. Nick’s mother, Eleanor (Michelle Yeoh), doesn’t approve of Rachel and ultimately, the idea of having to choose between family and love comes up. This movie is realistic, diverse, funny, and everything a good rom-com should be.

Video used from youtube.com under Fair Use

This movie highlights a realistic depiction of love because it focuses on the development of the side characters as well as the main characters. As Simon grows and comes out to his friends, they also suffer the repercussions of his quest for a relationship. Several of them grow past their prejudices and suffer heartbreak separate from Simon’s. The story provides a heartwarming example of being a lighthearted film while also providing a realistic exploration of sexuality and relationships.