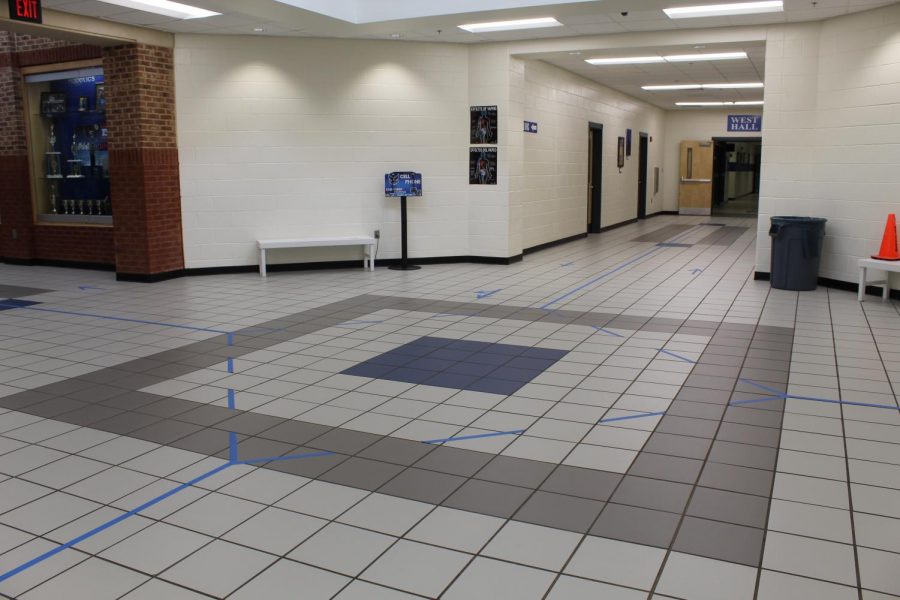 Walk around. Blue marking around the school guide student traffic. the administration worked hard to ensure that they would minimize the spread of COVID by guiding more students outside.

One of the biggest changes to South due to COVID are the blue arrows denoting new hallway patterns throughout the school. These are supposed to maximize the amount of transitioning students do outside the building and minimize exposure inside South.

According to the CDC’s Operational considerations for reopening schools, “[schools should] Establish one-way circulation in hallways, classrooms, and school facilities. Provide physical distancing guides, such as tape, paint, or chalk on floors or sidewalks and signs on walls, to ensure that staff and children remain at least 2 meters apart in lines, hallways, sanitation facilities (toilets/latrines), and at other times, and assign staff to monitor hallway, classroom, and facility traffic to ensure physical distancing guidelines are followed.” In addition, the Georgia Department of Education’s COVID guide on reopening schools also echoes the importance of one-way hallways.

Mr. Morlanne, one of South’s assistant principals, came up with the idea. “We literally walked the entire campus and studied the most popular routes students took and then tried to figure out how to alleviate the crowd in those areas,” he explained.

This is consistent with what South has been doing in terms of its traffic patterns. The hallways branching off of the West Hall wing are all one-way hallways, and students now need to go outside through the double doors and swing back around the school. This may add a minute or two of transition time, but it could help prevent lots of exposure that would otherwise occur with students bumping into each other.

In addition, the rotundas near the cafeteria and the atrium now serve as roundabouts, and students must follow the flow of traffic so that no one is going the opposite direction. In addition, school administrators stand in the center to make sure that no one is cutting corners.

“We’re doing the absolute best we can, and it does depend a lot on student compliance and following the rules to help their peers.””

Mr. Morlanne said, “I had to make examples- there were kids who were cutting corners, and I had to stop them and ask, ‘If you were driving, and you did that, what would happen?’ and they realized it would be a head-on collision; this is just like that. You have to follow the rules.”

Essentially, it works just like driving, and students have to respect the patterns as such. Driving on the wrong side of the road can have disastrous consequences, and walking on the wrong side of the hallway can have unintended exposure. While a lot of these changes seem like second nature, it’s important to keep them in regard while transitioning in school so that we can minimize exposure and help keep South in school for as long as possible.