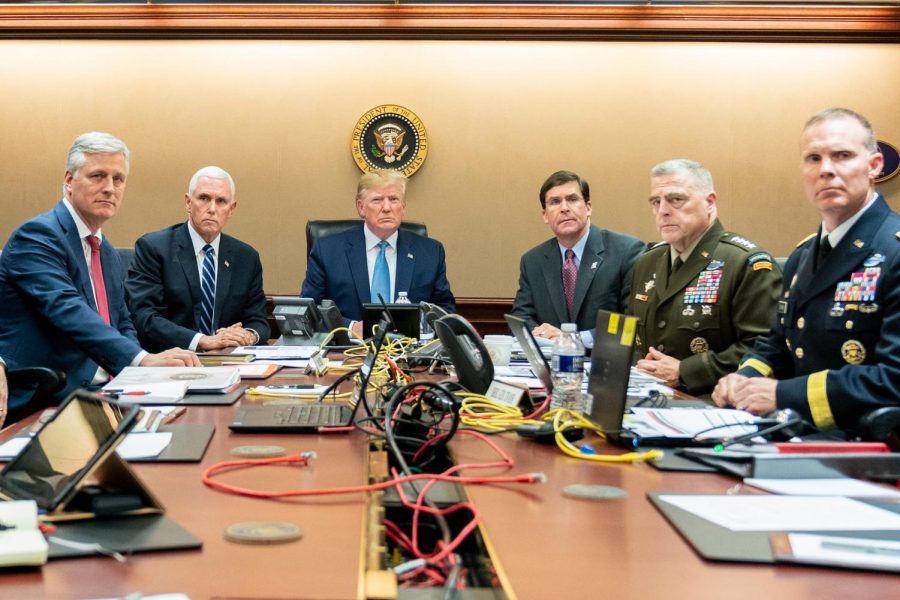 Photo from The White House via Flickr.com under Creative Commons

Looking into a storm. Pictured are President Trump and his counsel watching the raid unfold. Trump claimed to have been in close touch with the special-op forces, and aims to eliminate Islamic Forces in Syria. He claimed on Twitter, "Just confirmed that Abu Bakr al-Baghdadi’s number one replacement has been terminated by American troops. Most likely would have taken the top spot - Now he is also Dead!"

The operation began with the help of several top informants working with the U.S military to track Baghdadi’s whereabouts. Along with the informants, the Syrian Democratic Forces (specifically a Syrian military leader named Mazloum Abdi) also played a major role in helping the United States military with the raid.

For five months there has been joint intel cooperation on the ground and accurate monitoring, until we achieved a joint operation to kill Abu Bakir al-Bagdadi.

When discussing their contributions to the operation, and American official stated, “He, his people, and his intelligence sources, played a key role in all of this,” the official said. “It’s a very, very important role. Nobody should underestimate how key the SDF was in all of this.”

The tracking had gone on for over five years, and the raid could not be properly planned without knowing Baghdadi’s stable location.

They eventually were able to track his whereabouts in a town called Barisha; specifically in a house-like compound, filled with strategic tunnels and hidden areas.

The United States military elite Delta forces and 75th Ranger Regiment storming into Baghdadi’s compound, with several officials and military dogs. They began to invade the premise and found several children and women hidden around the house. But it was not until they raided the tunnel system that they found Baghdadi, hidden with three children surrounding him. He was reported ‘crying and whining’ when he was found cornered in the tunnel wearing a suicide vest.  He then detonated the bomb, killing himself and his three children.

In the days following the raid, the U.S Defense Secretary Mark Esper spoke to CNN News about protecting oil fields in Syria following the attack.

The President made a commitment to [protect the oil fields],” Esper said. “But in the meantime, we’re going to make some other moves to ensure that we can accomplish that mission of securing the oil fields in order to deny them access to ISIS.

He also spoke in praise of the president and the success of the mission.

“Baghdadi and the thugs who followed him were responsible for some of the most brutal atrocities of our time,” he said. “His death marks a devastating blow for the remnants of ISIS who are now deprived of their inspirational leader following the destruction of their physical caliphate earlier this year.”

Some, however, spoke out in protest of President Trump’s decision to leave congressmen and Democratic politicians in the dark about the raid. Senate Minority Leader Chuck Schumer claimed to have, “first seen [the raid] on television,” indicating his unawareness of the situation.

A student at South Forsyth High School, who wishes to remain anonymous, claims, “I don’t support Trump’s decision to keep the Democrats in the dark. We, as a country, have to stand together and put our differences aside to keep [our county] safe. By keeping [politicians] in the dark, it creates issues.”

Regardless, the success of this mission is a sign of triumph over evil and will mark a day of pride in our United States Armed Forces.