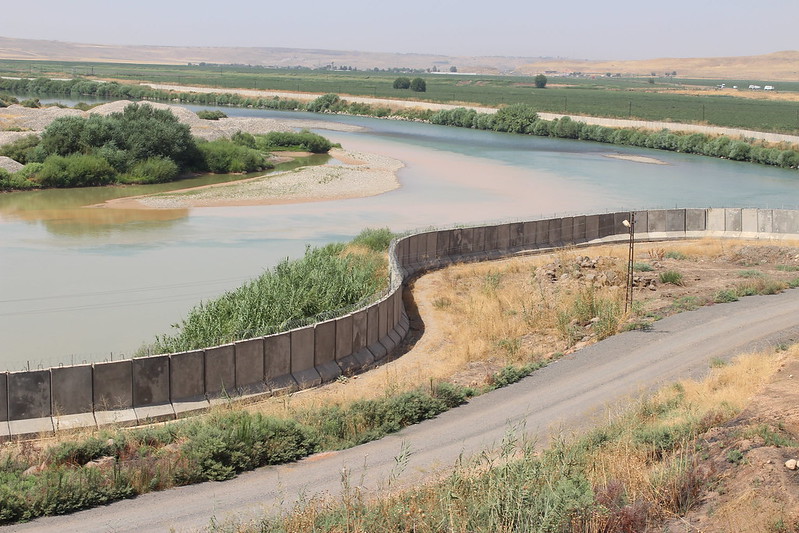 Dangerous borders. This capture embodies the serene and placid Tigris river by the Eastern side of the Turkey-Syrian border. However, these countries’ borders are highly unsafe and risky to be around since there are constant attacks and activity between Kurdish rebel groups and Turkey.

An unknown topic has risen in the midst of the already tenuous Middle Eastern problems: the Turkish-Kurdish conflict. This conflict has been significant in the Middle East starting from the 1970s and tensions have risen since. The Kurds, the 4th largest ethnic group in the Middle East, do not have their own homeland as they are spread out in the countries of Turkey, Iraq, Syria, Iran, and Armenia. Kurdish people started to push for their own country after World War 1 and the fall of the Ottoman Empire. According to the Sykes-Picot Agreement, there was supposed to be a part of Turkey set aside to be a land for just Kurds, but they never received the nation. Thousands of Turkish nationalists relocated into Kurdish majority areas of Turkey. Since then, the Kurds have tried numerous attempts to have their own nation, but their efforts have constantly fallen short.

On the other hand, Turkey justifies their actions towards Kurds, specifically the bombing directed toward Kurdish fighters in Syria on October 9th, as a defense because of the potential threat from Kurdish separatist groups. According to President Erdogan of Turkey, the goal of the event, and even of previous attacks was to “destroy the terror corridor.”

Erdogan continued to say, “those who engage in bullying by putting their trust in foreign forces will tomorrow find themselves in the grave.”

The group that the President was primarily referring to was the P.K.K., also known as the Kurdistan Workers’ Party, has Marxist-Leninist roots and has been calling for an independent Kurdish state within Turkey. But that is not what the PKK wants.  The P.K.K.’s military leader, Cemil Bayik, expressed, “We want to live within the borders of Turkey on our own land freely… The struggle will continue until the Kurds’ innate rights are accepted.” Currently, the P.K.K. is considered a terrorist organization by the US, Turkey, and the European Union.

Another group that is also emerging in the midst of this crisis is the S.D.F., the Syrian Democratic Forces. The S.D.F. aims to create a safe-zone towards northern Syria and Turkey border where millions of Syrian refugees can be resettled. This militant group consists largely of people from the Y.P.G., Kurdish People’s Protection Group, and Arab militias, where the group almost acts as an alliance between the two large ethnic groups. Now, this is where the United States comes into the situation. Around 2017, the US began to arm S.D.F, in turn, to recapture Raqqa, Syria, the capital of Syria. Additionally, the US stationed 30,000 soldiers in Syria to help Kurdish fighters in Syria. The action was criticized by other international forces, especially Turkey. President Erdogan accused the US of forming a “terror army” and the Turkish government continued to accuse the Y.P.G. of carrying out ethnic cleansing against Syrian Arabs, but after further investigation, it was cleared by the United Nations.

The tables have now turned as US Defense Secretary, Mark Esper, stated that President Trump ordered the remaining US forces out of Syria. Esper disclosed in a CNN interview, “We have American forces likely caught between two opposing, advancing armies and it’s a very untenable situation. I spoke with the President last night, after discussions with the rest of the national security team, and he directed that we begin a deliberate withdrawal of forces from northern Syria.”

A significant amount of tension builds up from the fact that Turkish forces were closing further into Syria. This crisis does affect people from not only Turkey and Syria but also the US now. Two South students, hailing from Iraq and Bangladesh, speak out about their opinions on this prominent topic.

1. In breaking news today, there is tension between the nation of Turkey and Kurds, the 4th largest ethnic group in the Middle East. These tensions are not a new issue, their relationship has been in this state since the 1980s. The Kurds are fighting for their own nation-state, Kurdistan, while Turkey views them as a threat. What is your take on the whole topic?

Uzma Khan: My own country, Bangladesh, fought for their independence and they got it. I think it’s important to give voice to the Kurds.

Gheed Nafea: I feel like there’s gonna be conflict anywhere, anyplace, any time. It just so happens right now it’s with the Kurds and the Turks. It’s not new, and it’s kind of surprising that people are starting to talk about it now because the U.S. decided to pull their army out. It just shows how there’s always conflict, but when the U.S. gets involved, everyone knows about it. Just because it’s not in the news, and not in the mainstream media, doesn’t mean it’s not a thing. This is the big assessment because this has been going on for a long time and just now are people starting to be like “Oh the Kurds? Yeah, they need our help.” They’ve always needed our help.

2. Recently, Turkey bombed Kurds in Syria. However, Turkey has viewed the P.K.K., a Kurdish terrorist group, as a potential threat to their own country. What do you have to say about this?

Uzma Khan: It seems like the Kurds just want freedom, and Turkey is using the fact that they have terrorists as an excuse to attack them and their rebellion.

3. President Trump recently pulled troops from Northern Syria, where they kept from uneasy peace among the two forces. How do you think this will turn out in the rising tensions between the two opponents: Turkey and the Kurds?

Uzma Khan: Now that there aren’t troops there, I think tensions will definitely increase, and maybe start a major violent thing.

Gheed Nafea: The U.S. is an amazing nation of course, but it kind of gets countries to the point where they rely on them to keep their people safe. But they also don’t want them. I’m from Iraq, so from personal experience it’s kind of where if the U.S. leaves, Iran will bomb us. But the U.S. isn’t really protecting the people either. And at the same time, they’re hurting the economy. So they’re not really benefiting both ways. I think now that Turkey and the Kurds are alone, without the U.S. as a buffer, tensions will definitely increase.

4. Turkey recently bombed Syria in an area where Kurds are currently living. Do you think their actions were justified?

Uzma Khan: Now, Turkey’s actions don’t seem to be very justified. They’re harming other nations and other places, just to go after this one specific group, and all Kurds want is independence. The mentality of “Oh this group has terrorists so that means the whole group is bad” has a negative effect on a lot of things. Especially when like, for example, a lot of people are against innovation. I think that mentality is a very bad mentality to have. I don’t think it justifies Turkey bombing the Kurds.

Gheed Nafea: Personally I don’t think bombing anyone anywhere is ever justified, even if it’s for the sake of protecting your own people. It’s like, “are you really putting the price of another beings’ life over the potential terrorism?” The risk for potential over bombing innocent children and causing people to flee from their home, I don’t think that’s justified.

Not only has the White House spoken out about the President’s actions, but Republican lawmakers have denounced Trump’s decision as a betrayal against the Kurds, a blunder that will weaken American credibility, and turn on their efforts to defeat ISIS. It is often easy to forget that many of our troops remaining in the Middle East have been placed there as a step closer to bringing down the massive radical group. Future actions towards this crisis remain unsteady as the two vengeful and rival forces, Turkey and Kurdish groups, now have no buffer between them anymore.