To all the Netflix movies I’ve watched before 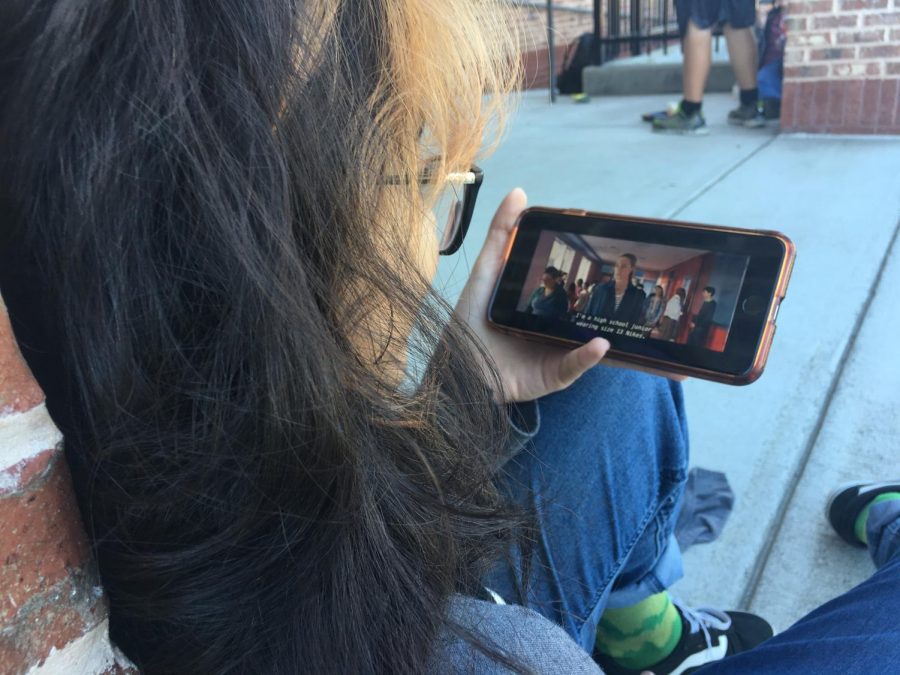 Netflix at South. Freshman Aribah Tely enjoys her lunch while watching the new Netflix film, Tall Girl. The movie entertains its adolescent audience, but its content is known to be controversial.

Netflix is good for many things such as binge watching and post-breakup comfort, but reflecting the accuracy of high schools isn’t one of them. Jocks shoving nerds into lockers, popular kids stuffing their lunches down other kids’ shirts, and close-knit cliques that never break apart are some of the many stereotypes perpetuated by the streaming service. Recently, many Netflix Original movies like Sierra Burgess is a Loser, To all the Boys I’ve Loved Before, and Tall Girl have launched, claiming to show a different perspective on being a high schooler. However, their portrayal of high school appears to have discrepancies that can miscommunicate the atmosphere to the general audience.
Tall Girl

The 2019 film, Tall Girl, has been in hot water since its release on September

13th. The story starts with Jodi Kreyman, a 6’1” junior wearing men’s size 13 Nikes who is insecure about her height. Throughout the film, students constantly ask her, “how’s the weather up there?” which belittles her value in herself. Jodi, however, finds confidence when foreign exchange student, Stig Mohlin, joins her class, and she has faith that a guy will finally like her due to his equally towering height. When Jodi kisses Stig, her new crush absorbs her entire world, throwing her into a love triangle triangle between Stig and her best friend, Jack

Dunkleman, who’s had a crush on Jodi for a long time.

Stig, however, is more concerned with his social status in his new school, and he continues dating popular girl, Kimmy Sticher, while equally pursuing Jodi. After many obstacles, she finally accepts her insecurities with the help of her friends and family. Jodi announces a speech at her school’s homecoming dance, telling her peers that her height does not define her.

The main dilemma that this Netflix film portrays is the unnecessary oppression towards tall females. Being a tall female is not as uncommon as Tall Girl illustrates it to be. Protagonist, Jodi Kreyman, is only 6’1”, a height that isn’t unusually tall this day in age. Jodi is shown being under constant fire from her classmates because she is taller than most of them. Being tall encircles her entire life, making the genetic trait seem worse than it really is. In a real world high school, most students are indifferent about height. Students have more concerns than how tall their peers are.
Sierra Burgess is a Loser

Sierra Burgess Is a Loser is one of the most controversial Netflix movies ever. The plot follows Sierra Burgess, an unpopular teen who doesn’t conform to society’s typical standard of beauty even though she has a charming personality. Sierra, in an
attempt to win over the guy she likes (Jamey), makes a deal with the school’s popular cheerleader, Veronica. She agrees to tutor Veronica if Veronica will catfish Jamey for her. It starts off with just phone calls, and eventually gets worse to an actual date where Jamey thinks he is kissing Veronica but in reality, has his eyes closed and is kissing Sierra. The movie ends with the truth being revealed, Jamey being mad at Sierra, but forgiving her quickly and going to the dance with her.

One of the main problems in the movie is the values it promotes. Burgess catfishes, lies, hacks, and sells out one of her friends in order to get the guy she likes. Instead of facing repercussions for these actions, she is instead rewarded by both increasing popularity and getting the guy. In one scene, she even pretends to be deaf so Jamey won’t recognize her voice.

This is completely insensitive to actual deaf people and the prime example of someone selfish and calculating. Sierra Burgess is a loser, but not because of her body size. She’s a loser because she thinks catfishing, manipulating, and scheming is okay. The movie perpetuates shady values under the guise of body positivity and depicts high schoolers in an inaccurately negative light.

The movie emphasizes superficiality and takes catfishing, a very serious issue, lightly. In reality, high schoolers are a lot more serious about it and chances are, if someone catfished them, they wouldn’t date them.

The Kissing Booth follows Elle King, who is best friend and birthday twin of Lee Flynn. Elle and Lee have been best friends for the longest time, and they’ve set rules to keep the friendship intact. The main rule: neither can date the others’ siblings, namely Lee’s older brother Noah, who Elle has liked since childhood. After a coincidental series of events leads to Elle and Noah kissing at a school fair, the two pursue a secret relationship. Lee eventually finds out leading to lots of heartbreak and the two falling out. Eventually, Noah and Elle get back together with Lee’s blessing and everyone is happy ever after.

The biggest inaccuracy with this movie is that the school even allowed a kissing booth. High schools won’t typically allow the display of something like that, much less gain funds from it. The movie shows how high school is just making out and parties, while the actual atmosphere is a lot more serious and stressful. There is even a scene where Elle comes to school wearing a short skirt and is cat-called by seemingly every single guy at the school, and yet the situation ends with Elle being labeled as “asking for it” by the principal. Not only is this extremely sexist, but a completely inaccurate representation of how harassment is addressed.

Everyone loves a witty stereotypical movie with exaggerated characters. It’s why classics like Mean Girls never go out of style. However, Netflix is trying to address real issues such as body positivity. Keeping that in mind, they should be a lot more careful on how they portray students, administrators, and high school as a whole.