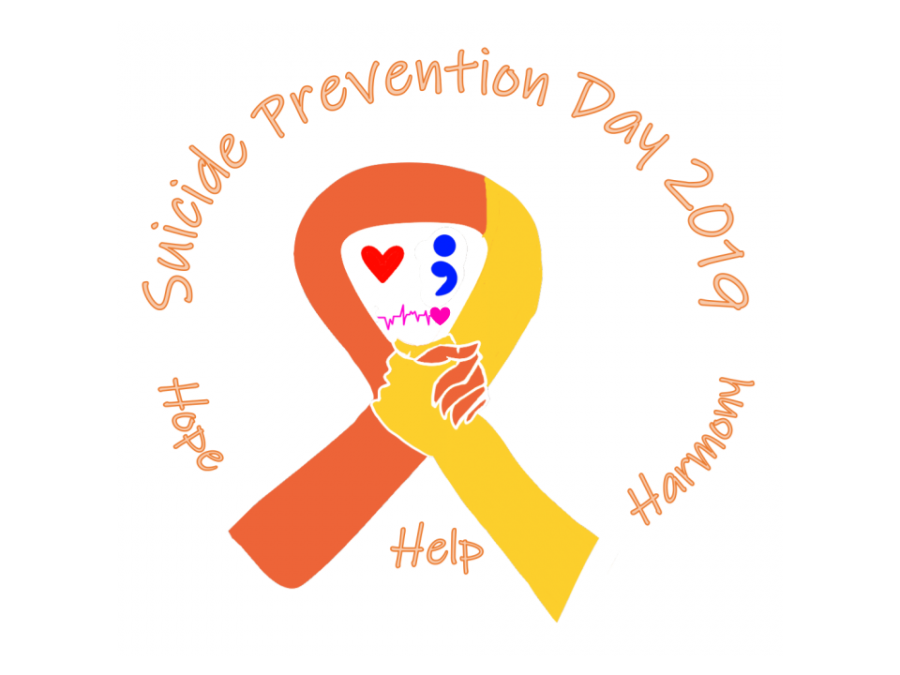 Saving lives. South Suicide Prevention Day educated students, advising them to unite together to overcome the challenges of mental illness. Several symbols such as a heartbeat, semicolon, and yellow ribbon were advertised to show the value of continuing life.

Suicide Prevention Day at South
On, Tuesday, September 10, 2019, waves of orange and yellow flood the hallways of South Forsyth High School. The students and faculty band together in unity to fight against an illness that targets ecumenically. SFHS spreads awareness by wearing their orange and yellow gear in support of suicide prevention. Many students and faculty on campus celebrate such colors in honor of Suicide Prevention Day to bring attention to the growing issue throughout the world.

Suicide prevention week is the week of the 8th-14th. On the 10th, South Forsyth brought awareness to suicide and its tragedies by wearing yellow and orange during the day. Additionally, students who forgot to wear yellow and orange were provided with a yellow ribbon sticker to proudly wear throughout the day.

Extra time was added to students’ fifth-period class, to ensure students and staff understood the reason for such a day. Administration at South required teachers to play a PowerPoint presentation promoting discussion and openness to talk about suicide and suicide prevention. On this day, students learned how they, as non-professionals, can lead peers dealing with such severe mental illnesses to the professional help they may need.

Freshman Aribah Tely expresses her passion for suicide prevention day, stating, “I chose to wear orange today because every life matters, and suicide is an unfortunate circumstance. I know a friend who dealt with suicidal thoughts. She struggled a lot and seeing that happen right in front of me was also very hard for me. And I tried to help, but not being able to do anything is hard. And if I could help in any way even if it is just wearing orange then I will try to.”

One of South’s teachers, Mrs. Colavito, a tenth-grade chemistry teacher, wore a shirt in remembrance of world suicide prevention day. She has felt the effects of depression and suicide. She lost her nephew two years ago to such an experience. Her sister, Jennifer Hernandez, had a son named Anthony.  “Anthony was a typical teen. He had tons of friends and was always smiling on the outside, but no one saw what was hidden on the inside,” Mrs. Colavito recounted. He held great amounts of sadness no one could see. He was on medication for his depression but none of them worked for him and was seeing a counselor very regularly.

None of his friends noticed the struggles lurking beneath the surface. In November 2017, Anthony was diagnosed with bipolar disorder. Bipolar is a serious mental illness classified by rapid mood swings between depressive episodes and manic fits. These moods can range from lasting days to months at a time and requires much attention to keep under control. After his diagnosis, the Hernandezes scheduled an appointment for him. He never saw that psychiatrist.

He was only 15 when he died. “He chose a method that is 99% successful, which meant he meant it,” Mrs. Colavito remembered, holding back tears. Anthony wasn’t calling for help anymore, he was giving up. Anthony shot himself on November 16, 2017. When asked how long he had been struggling, Mrs. Colavito said, “My sister kept things under wraps, she didn’t want us to treat him differently. But if I had to guess based on behavior, I’d say two years.”

Anthony died too early and left his family in sadness too terrible to name. He was buried the day before Thanksgiving, and that was the most somber Thanksgiving for his family. Every gathering since his passing has been heavy without his presence. After he died, Anthony donated his organs. He saved three lives postmortem. His mother Jennifer now travels around speaking out as an advocate for suicide prevention. Her family runs in a Colorado-based 5k every year in Anthony’s name. The 5k Donor Dash is ran in remembrance and celebration of organ donors, recipients, and those waiting for organs. As Mrs. Colavito remembered, they have one of the largest groups every year. Last year 300 people ran in Anthony’s name. Anthony may have left his life early, but the effects of his choice remain.

“This was not only more than a normal day,” sophomore Sydney Kunz explains, “but it’s a day to recognize how we can help and unite together as a school to fight against suicide.”


Statistics
During the day, students were shown a video detailing facts of suicide. The grim truth is that suicide is much more prevalent than many believe. Over 800000 people die annually, this is one death every 40 seconds. The global rate is higher in males than females, many people believe this is because of the stigma surrounding men having emotions. Many more people attempt suicide than people that succeed, every time one person succeeds 25 other attempts are made. One common factor in all suicides is depression. Half of all people that die of suicide have a major depressive disorder at the time of death. For every death, an average of 135 people are affected meaning almost 108 million people are bereaved every year. These people that have recently lost a close friend or relative to suicide are at a much greater risk of suicide due to blame and denial.

Many of these deaths are preventable. There are many behavioral indicators of suicidal thoughts. These include, but are not limited to, lessening interest in activities, social seclusion, and talking about killing themselves. Not every person will have all of these symptoms as every person is affected differently. These people that are at risk for suicide are many times seen as social outcasts, but many times they can be the most popular people. If you think someone may be considering suicide, talk to them and show them you care and are willing to help them.


Ways to Help
The target of suicide prevention day is to increase the awareness of adolescent suicide. The day allows peers, parents, and teachers to learn about warning signs and provide help to those suffering. There are now a numerous number of ways that adults and teens can provide help, one being present and listening. Another is Act (Acknowledge, Care, Tell). ACT allows those to provide another level of being present by noticing warning signs. Now days, many apps are created to decrease the risk of suicide. These apps allows teens to receive immediate help from a friend, parent, or therapist. A few apps that have been created are the notOK app, the Yellow Ribbon app, and My GCAL app. If teens are unable to reach a trusted one during a crisis, they can call 800-273-8255 or text “connect” to 741741. These are just a few of the many ways teens and adults can be constantly involved and updated on the mental and emotional health of loved ones.

The Yellow Ribbon Foundation offers training programs as well as a phone number and text number. The main purpose of the program is to “prevent suicide and attempts by Making Suicide Prevention Accessible to Everyone and Removing Barriers to Help”.

The Not OK app grants teenagers the ability to reach five preselected contacts with the click of a button. After the button is clicked, a text is sent out with a link to the user’s GPS location and the message, “Hey, I’m not OK. Please call me, text me, or come find me”. The app, which is free, creates a beneficial and easy way for adolescents to reach a trusted one. Users can contact the creators of the Not Ok app at [email protected] and (678) 337-1361.

The My GCAL app allows teenagers to call, text, or chat with caring professionals 24/7 and 365 days out of the year. The professionals provide telephonic crisis intervention services, dispatch mobile crisis teams, assist individuals in finding an open crisis or detox bed across the state, and link individuals with urgent appointment services. The app is very convenient and help can be reached from a click away.

South Forsyth’s head counselor, Edward Fernandez, frequently works with students dealing with suicidal thoughts and depression. Suicide prevention is a topic that Mr. Fernandez is passionate about, especially when it affects students.

“People are starting to realize that this is too much for one person to handle that they need to tell an adult,” Mr. Fernandez stresses, “I think students are more comfortable to come and let us know that these things are happening.”

He advises students to present their issues to adults rather than to keep it to themselves. With five counselors working at SFHS, they are always available to talk to students in need of help. A common trend amongst teenagers is their reluctance to share their emotions with other people, especially adults. Mr. Fernandez believes that students are becoming more aware of the advice being given to them, and they can apply it to their situations.

Tuesday, September 10th. A day full of yellow and orange shirts and skirts, jewelry, and shoes. A day the subject of suicide and suicide prevention hung open in the air. Words and phrases along such lines were uttered by many teachers and students throughout the sunny day.