11Alive catches a glimpse of the War Eagles in action 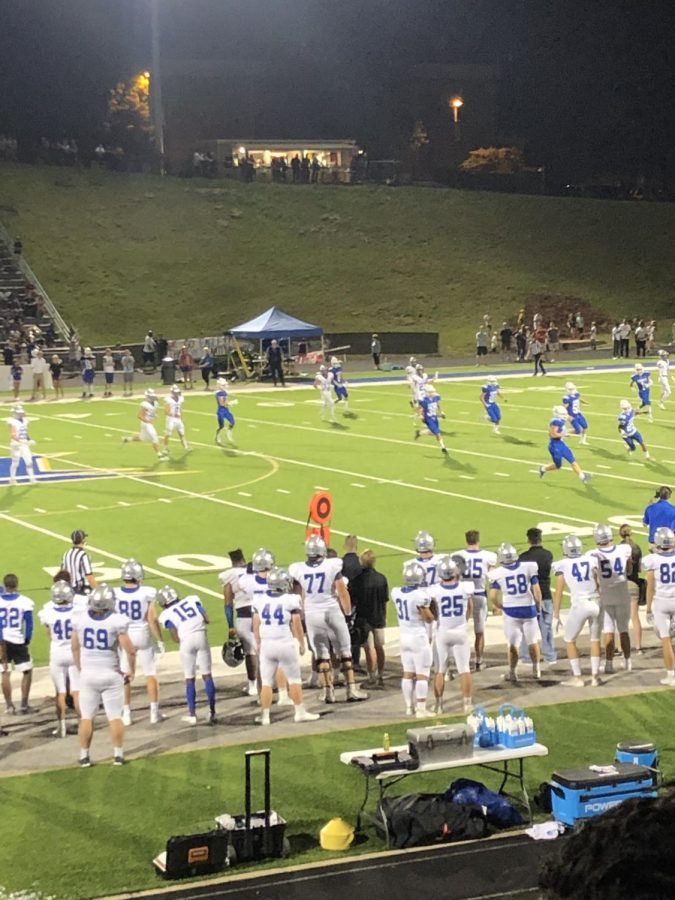 All coming together. South students and faculty dress in jerseys to support their favorite team. The game was filled with renewed zeal from winning the 11Alive coverage.

SFHS has recently entered the football season and brought a flood of school spirit along with it. Thousands of eager students whipped out their phones to vote South as Team of the week through the SuperFan app. The school was buzzing and one by one, administrators came on the speaker and encouraged students to keep the polls up for Sofo football in their battle against fellow high schools. Mr. Gravitt, the school’s sports director and girl’s basketball coach, was especially enthusiastic as he came onto the intercom to remind every student to get on the website and support their school.

Following his message, the football team crossed their fingers in anticipation as they were votes away from being number one. The winning matchup would have their game broadcast live for Atlanta. Time was flying by and the school held their breath. With only five minutes left, SFHS was in the lead and their numbers continued to accumulate as SOFO nation cheered them on. The line between South and Denmark was razor-thin, but SFHS remained on top.

With one minute left,  South still held the lead and the school took a breath of relief, followed by cheers and applause. The polls closed, and South pulled into first. SOFO football was named Team of the week and would be seen live on Friday night. 11Alive informed the school that a team of photographers and reporters would be at the game to capture all the excitement. When Friday finally came around, students were dressed with their favorite jerseys.

Etowah won the coin toss in which allowed South to start with the ball on offense. Durham threw to Schurr who sprinted into the end zone for the first touchdown of the game. After the extra point, South led 7-0 with 11:10 left in the first quarter. Etowah made little gains until the quarterback is sacked on fourth down forcing Etowah to punt the ball. After many gains, South moved the ball upfield and closer to the end zone. A pass to McGlokton and extra point by Botta pushed South’s lead to 14-0 with 5:12 left in the first quarter. Before the end of the first, Etowah flew down the field and scored a first touchdown. The game was tightened with a 14-7 lead for South.

The second quarter began with a War Eagle fumble resulting with Etowah on offense. Etowah threw a touchdown pass, tieing the score with 11:39 left in the half. South, could not pass the Etowah Eagles defense. They punted the ball to Etowah’s 45 yard line. With 8:35 left in the quarter, the Etowah runner found the endzone, gaining the Eagles seven points and the lead. South fumbled the ball the second time in the game but created a hard defense line, keeping Etowah from moving up field. War Eagles, now on offense, soared down the field. Schurr scored the next touchdown, leveling out the score. With less than 20 seconds left, Etowah made the last touchdown of the half. South took a knee, ending the half. Etowah led 28-19.

The second half started with a fumbled pass play. Weaver took the ball and ran to midfield before being tackled. After throwing an interception, the War Eagles brought out their defense and after a fumble by Etowah, South was back on offense again. South began at the 27 yard line. With 47 second left in the quarter, South took a time-out. The quarter ended, Etowah leading the score 28-19.

Moments into the final quarter of the game, Josh Green tackled the Etowah received on their fourth down. After much blocking and fighting, Tre Green scored for South, bridging the gap 28-26. With 6:19 left in the game, South retrieved the ball on their 19 yard line. Etowah, however, ended up taking the touchdown. The War Eagles again had the ball with 4:00 left on the clock on their 35. Schurr broke free of a tackle and made a run downfield for another touchdown. After an unsuccessful field goal, South led 31-32 with 3:12 left.