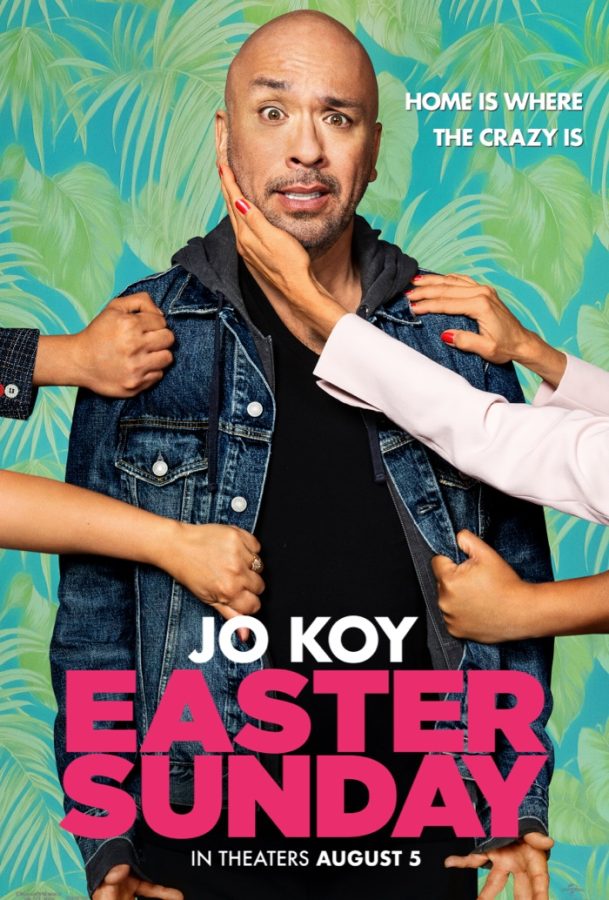 Used with permission from Universal Pictures under fair use

Growing up Filipino-American, I rarely saw any form of Filipino representation in the media. Throughout elementary school, none of my classmates could pinpoint the Philippines on a map.  It was a win if they simply knew the country existed.

But recently, Filipino-Americans have received small snippets of representation through the Disney+ hit High School Musical: The Musical: The Series and more famously, from one particular scene in Spider-Man: No Way Home. And finally, on August 5th, comedian Jo Koy’s Easter Sunday came to the big screen featuring a majority-Filipino cast, and my family and I drove to the theater, ecstatic to see people who looked like us in an American film.

At the start of the movie, they introduce the main character Joe Valencia (Jo Koy), an LA-based comedian most famously known for his appearance in a trending beer commercial. His first conflict emerges when he auditions for a wacky neighbor character on a T.V. pilot. The producers will only give him the job if he does a funny Filipino accent for the character, but he believes he can be funny without portraying a stereotypical Asian. However, other conflicts arise when his mom (Lydia Gaston) who lives in Daly City invites him over for Easter. Joe and his teenage son, Junior (Brandon Wardell), venture on a road trip up to Daly City to visit Joe’s Filipino family for the holiday.

The premise of the film seems simple at first. Joe’s mom, Susan, and his Tita Theresa (Tia Carrere) are in an argument, and he has to solve their problems while balancing his work dilemma with his T.V. pilot audition. But things get a little more complicated with his cousin, Eugene (Eugene Cordero). Due to poor spending habits, Eugene owes forty-thousand dollars to a loan shark named Dev Deluxe (Asif Ali).

Eugene’s bad decisions fall onto Joe’s lap as he becomes the one who has to undo his cousin’s mistake while attempting to end the feud between his mom and his Tita. And to top it all off, Joe has to mend his distant relationship with his son.

If that seems like a lot to digest, well, it is. In one hour and 36 minutes, Easter Sunday attempts to cram in Joe’s acting career issues, Susan and Theresa’s argument, and Junior’s inner turmoil with his Filipino ethnicity, all while somehow throwing in a car chase scene in the middle.

That is the biggest problem with this movie: there are too many storylines, and none of them are fully fleshed out due to the time crunch.

Because this movie is ultimately a comedy, the filmmakers relied on randomness to draw quick laughs. For example, Eugene’s “hype bus” that he bought with the money Joe lent him has around two or three scenes, though it disappears in the latter half of the movie. The hype bus pretends to be an integral part of the film, but it has no real relevance, and it is only there to make a few jokes about Eugene’s “clout chaser” personality, which happens to be a Filipino stereotype.

Since Jo Koy is in the comedy industry, Easter Sunday featured a few famous comics like Jimmy O. Yang and Tiffany Haddish. Their scenes are the funniest due to their strong acting skills. Yang plays Martin, the awkward reseller who’s also a sneakerhead, and Haddish portrays Joe’s ex and police officer, Vanessa.

Unfortunately, it feels like the movie uses these celebrities as a crutch to appeal to a Western audience. Their characters were written for the actors, not for this film.

Although the non-Filipino characters had some stronger comedic moments, and despite the incredible time crunch, the film’s Filipino cast should not be underestimated. Tia Carrere, who portrays Joe’s Tita Theresa, does a fantastic job at playing the bongga, or extravagant tita that every Filipino family has. Tito Arthur (Rodney To) had the best comedic timing throughout the film and was an overall great character (I don’t even know how he was related to Joe, but that itself is very reminiscent of every Filipino family). Lydia Gaston, who plays Susan, was a very accurate Filipino mom and lola, and I could feel her criticisms through the screen.

However, some weaker actors didn’t quite sell their roles to me. Unfortunately, Jo Koy’s portrayal of Joe was a little lacking; he doesn’t come from an acting background, so it made sense that he fell flat at times. Jo Koy’s strongest moments occurred whenever his character did stand-up in the movie. My favorite scene with Joe was when he did stand-up at the Easter church service.

Brandon Wardell, who plays Joe Valencia’s son, Junior, failed to effectively deliver Junior’s role in the film. Junior is one-fourth Filipino and spends the entire film struggling with his Filipino identity since he doesn’t know much about the culture. He is such an important character to the Filipino community, so he had to be done right. Many half-Filipinos face inner turmoil and desire to learn more about the culture of their relatives, but they don’t know where to start. Unfortunately, I didn’t see that in Wardell’s acting choices.  Like Jo Koy, Wardell does not come from an acting background. He is also a half-Filipino comedian, but his talents never get the chance to shine in the film, since Junior isn’t written as a comedic role.

Moreover, Junior has zero chemistry with his love interest, Ruth (Eva Nobelzada). Ruth is a Filipino girl he meets during Easter Sunday lunch who teaches him more about the Filipino culture. Their romance feels very forced, and their almost-kiss scene was the most uncomfortable part of the movie. Nobelzada’s portrayal of Ruth was great considering the writers didn’t give her any depth, but her interactions with Wardell’s character were flat and were hard to watch at times.

Another smaller motif that wasn’t executed effectively was the halo-halo analogy that Ruth mentions twice in the film. Halo-halo is a famous Filipino dessert made of crushed ice, evaporated milk and various other ingredients such as ube jam, beans and fruits.  Ruth compares halo-halo to a Filipino family, describing it as “messy” but “you keep coming back for more.” This is a powerful message that unfortunately drowns in the large plot and continuous movement of the film. We as an audience never get the chance to fully digest and understand the messages when the main characters have to run from a loan shark with a gun.

I think this film could have been stronger if it focused solely on the Valencia family rather than Joe’s acting career or Dev Deluxe, the loan shark. I was hoping the film would resemble My Big Fat Greek Wedding where it would feature many Filipino traditions and poke fun at stereotypes throughout one cohesive story. Instead I was disappointed to find it more closely resembled a very low-budget Fast and The Furious film.

While I have my grievances about Easter Sunday, it is a step in the right direction for the Filipino-American community. It was nice to watch a movie in a foreign language that I didn’t need subtitles for, and I connected with a lot of the traditions and characters of the film. In the future, I hope to see more obvious forms of Filipino representation similar to Easter Sunday, but this movie is a solid start.

Thanks for supporting Easter Sunday this weekend! If you want to support other Filipino American films, here’s a short list:

So much talent in our FilAm community! 🇵🇭🇵🇭🇵🇭

Would I recommend this movie to non-Filipinos? Not necessarily, but it is a good watch for those who want to learn a little bit more about Filipino culture in a more comical and light-hearted setting.