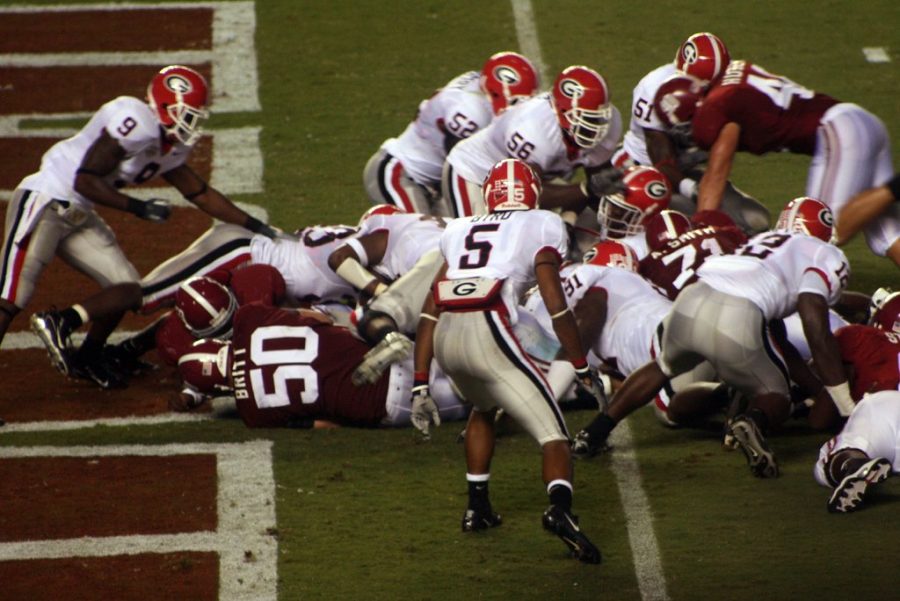 "Alabama vs. Georgia" by Diamondduste is licensed under CC BY-NC-ND 2.0

A long awaited rematch. The University of Georgia play the University of Alabama to see who earns the National Championship title. In a exciting yet tough game, Georgia came out on top and brought back home their winning title.

As the game began, Alabama received the ball by kicking a field goal, placing them in the lead by 3 points. The Bulldogs struggled through the first quarter as both teams fought for the ball and attempted to gain more yards. In the second quarter, Georgia scored two field goals, placing them on the scoreboard 6-9 before halftime. Fans awaited the plays during the third quarter as both teams simply continued to throw field goals during the first two quarters with no touchdowns. Many fans were on the edge of their seats, anticipating the outcome of a game that was thus far pretty unexciting.

While Alabama took the lead in the first half of the game, the Bulldogs quickly took the lead during the second half. Georgia running back James Cook scored the first touchdown of the game, putting Georgia in the lead for the remainder of the third quarter. With a score of 13-9, both teams had the opportunity during the last quarter to bring home victory. Georgia’s lead in the game was short-lived as Alabama scored their first touchdown of the game during the fourth quarter. However, Alabama did not hold onto the ball for long as Georgia took back the ball and earned another touchdown, making the score 19-18. The Bulldogs’ defense proved to be their main asset; in the last few minutes of the game, Georgia defensive back Kelee Ringo intercepted Alabama’s quarterback Bryce Young, leading to the final touchdown of the game.

The Georgia fans, coaches and players joined in the excitement as the Bulldogs finally claimed their National Championship title after waiting 41 years. With a final score of 33 – 18, the stadium filled with confetti as the Bulldogs celebrated one of the most memorable wins in Georgia history. UGA’s head coach Kirby Smart appeared beyond proud of his team and their victory, especially after a previous losing streak against the Crimson Tide.

Along with the celebrations in Athens, Georgia, many South Forsyth High School teachers and students watched the game in excitement as they watched the most remarkable game of the season.

University of Georgia Alumnae and AP Calculus teacher Ms. Kassie Smith watched the game Monday night and shared some of her favorite moments of the championship.

“It was such a good game in general from start to finish,” said Coach Smith. “I was super nervous the whole time, but I got to watch it with a group of very passionate Georgia fans, so there was a lot of excitement, a lot of tears and a lot of joy. It was a huge relief [when they won] especially after not beating Alabama after way too many years and finally ending the 41-year drought.”

To watch a recap of one of the biggest college football games of this year, check out the video below!