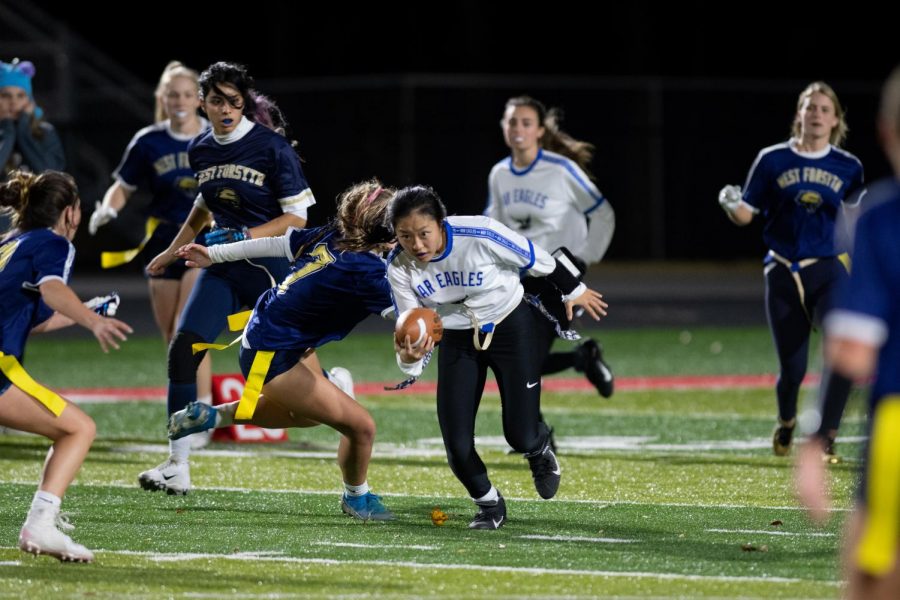 Used with permission from Coach Smith

A memorable game. South Forsyth's Flag Football Team scores a win at region. The team won against West Forsyth and claimed a ticket to the state championship.

The first half of the game reflected the team’s defense strategy as the ball was in possession once. A pick-six by South Forsyth’s Mya Wende resulted in a half-time score of 7-6, West still narrowly in the lead.

The Wolverines kicked off the match’s second half when Abbylin Laprise scored a short touchdown, giving West a 13-6 lead. The War Eagles swiftly responded as Ashley Chu drove the team down the field and passed to Delaney Pate to tie the score at 13-13.

As the end neared and the score remained tied, Josie Crossman struck in favor of South Forsyth. She intercepted a key pass and returned it to midfield, setting up the team’s win. Quarterback Ashley Chu threw the ball to Drew Necaise, who scored with only eight seconds left. The War Eagles snagged a 19-13 win in those last few moments, winning the title of region champs.

This match was emotional for both contenders as the teams played against one another in last year’s Final Four. West Forsyth’s win the previous year seemed to be a significant motivation for the War Eagles that night as they traversed the game.

The evening also consisted of two long-awaited matches solidified the season standings and the top four teams who would proceed to the state championship: South Forsyth in first place, Forsyth Central coming in second, West Forsyth in third, and Lambert in fourth.

The team’s practice regimen and unity fueled their win at region.

“We practice for about an hour and a half after school each day, except Fridays usually, and we start by running a lot of routes and a lot of receiving lines to get some throws. Early on in the season we work on more drills in flag pulling and other technique. Later in the season, split up a lot of offense and defense reps playing both sides of the ball,” says Coach Smith.

Notable team members include quarterback Chu, known for her great arm, and Crossman, a new member who emphasizes speed in the field.

Coach Smith tells us, “Brock had a lot of catches and interceptions. Drew Niekerk’s played both sides as well. Maya Wendy had a ton of big catches and a ton of big defensive stops. Eliana Vallenato are Kate Dominic phenomenal rushers. They cheer each other on, it is just one big family!”

The members of the flag football team have a deep bond that goes beyond the playing field. Their relationships and team spirit made all the difference this season as they claimed the title of region champs.