Joshua Bassett Changes the Narrative with His New EP: a Three-Part Story 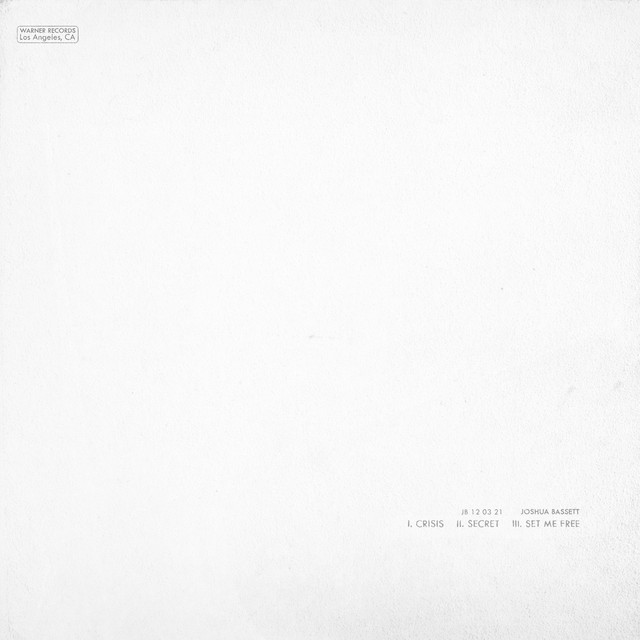 Used with permission from Joshua Bassett via Spotify under fair use

A three-part story. "Crisis/Secret/Set Me Free" came out on December 3rd. Bassett released it after finally gaining the courage to stand up for himself.

These songs also came with corresponding music videos because Bassett intended for the album to be a three-part story. Fans believe that the EP is in response to Olivia Rodrigo’s hugely popular album, “Sour”, and the SNL skit for “Driver’s License”.

The “Driver’s License” saga started in January when Olivia Rodrigo released “Driver’s License”, the first release from “Sour”.  The story is a little complicated: Rodrigo and Bassett were co-stars on the Disney+ show, High School Musical: The Musical: The Series. They were rumored to have dated and after they allegedly broke up, Bassett started dating Disney star Sabrina Carpenter.

The song sent the world into a frenzy of intense emotions, Twitter battles and strong hatred with its emotionally charged lyrics which fans were quick to connect to Bassett. In response, Sabrina Carpenter released “Skin” and Joshua Bassett released “Lie Lie Lie”.

However, song releases and the media weren’t the only things on the young star’s mind. On the day that Bassett released “Lie Lie Lie”, he was hospitalized for septic shock and heart failure.

In May, Bassett came out to his fans as a part of the LGBTQ community. He later confirmed this in an interview for GQ. Bassett talks a lot about how these two events affected his mental health during an already tumultuous time during which he was dealing with a lot of death threats and hate. In the songs for his EP, he mentions in various places how his mental health was terrible during this time through lyrics such as “I’ve been going through it too,” “Tell my mama I’m okay while holding back tears” and “Wasn’t sure I’d survive, never felt so weak.”

Fans have spotted many parallels between Bassett’s lyrics and music videos for his EP and “Sour”. This only fed the narrative that the two young stars were involved and wrote about each other. In an interview with GQ, Bassett confirmed that his new EP is, in fact, a response to “Sour” and all the hate he’s received in the past year.

However, despite all the hate, Bassett has been nothing but supportive and kind to Rodrigo. Before the release of his EP, Bassett sent a text to his fans urging them to “treat everyone with respect and love” and he informed them that “anyone who sends hate on [his] ‘behalf’ is no fan of” his.

Bassett told his GQ interviewer that the hatred in the wake of “Driver’s License” really messed with his mental health. He had actually written “Crisis”, “Secret” and “Set Me Free” six months ago, but he wasn’t in the right mindset to release them then. He released the songs on December 3rd because he wanted to stand up for himself and he finally gained the courage to do so.

The songs themselves are lyrically quite brilliant and Bassett’s vocals are powerful. In his GQ interview, Bassett explained that “Crisis” was about the crazy PR in the past year. After Rodrigo released “Driver’s License”, Bassett’s record label wanted him to take advantage of the media storm (“the label says to never waste a crisis”) but he felt as though it would be pointless to try and defend himself.

In the first verse, Bassett sings “if you get to tell your truth, so do I” in reference to him realizing his right to stand up for himself. Bassett starts off the second verse with “My mama called ‘cause she heard I got death threats” which humanizes him. It’s almost jarring (although necessary and long overdue) the way that he reminds listeners of his humanity and mental health struggles. On Twitter, Bassett announced that 100% of his earnings for “Crisis” in perpetuity would be donated to mental health organizations. This means that any profits Bassett could potentially make off “Crisis” for the rest of time will go to mental health organizations.

“Crisis” is raw and emotional. Basset’s voice combined with the piano accompaniment is incredibly soft. The song is so beautiful and calming that the subtle shade towards Rodrigo is both shocking and almost unnoticeable. Lines like “half the **** you’re saying’s only half-true” and “messing with my life is a career move” are unexpected. The part where he sings “Weren’t you the one who left in the first place?/ Weren’t you the one who called things off?” caused the most turmoil on the internet, with fans conflicted over whose side of the story to believe.

“Secret” is the EP’s second song and it greatly contrasts with “Crisis”. While “Crisis” was a softer track, “Secret” is more upbeat and resembles soft rock. “Secret” is about the discovery of an ex’s lie. Bassett takes on an accusatory (“Swore that you only had a crush/You told me that you would cut him off”) and conspiratorial (“your secret’s safe with me/And him, and all of our friends you told”) tone for the second track. Bassett’s voice is smooth like a jazz singer’s in this song; the track is less raw emotion and more collected. “Secret” seems like an odd mix between soft rock and jazz, but it somehow works.

Secret from Joshua Bassett’s EP is so addicting like it’s so groovy and lowkey jazz club vibes even tho it’s not jazz. I love it.

Bassett completely pivots once more with the third track on his EP, “Set Me Free”.  This was unlike the other two songs and it’s my personal favorite on the album. The third track is partly about Bassett processing sexual abuse he’d experienced in the past. Through this song, he communicates that he refused to let his abusers have control over him.

The vocals on this track are absolutely stunning. Particularly in the chorus when he sings “Set me free” and “Let me be”, there’s something unidentifiable about Bassett’s voice on those lines that is jaw-dropping and heart-stopping. It has an almost choir-like quality to it that is poignant and evocative. The line “I’ve been doing my time, I’ve been working on me” shows Bassett’s regret and maturity. The singer has grown a lot in the past year. He began to realize and unpack his trauma (“I’ve been facin’ my fears”) and this song really shows how he’s begun to set boundaries (“You don’t get to take all of me”, “I won’t ever let you hurt me how you hurt me/Again, ever again”). This track has the rawest emotion out of all three and it serves as a brilliant, gut-wrenching conclusion to Bassett’s EP.

“Crisis/Secret/Set Me Free” is a three-part story and Bassett has definitely achieved a narrative style. The songs take listeners through a cycle similar to the five stages of grief. It starts with “Crisis” embodying shock and confusion. “Secret” exemplifies anger and “Set Me Free” is acceptance. With how different the three songs are in tone, emotion and style, Bassett’s EP really has something for everyone.

Ultimately, Joshua Bassett’s new EP is powerful and raw. Evoking a myriad of emotions, it’s perfect for yelling along to the stereo while driving or sitting in bed.