SFHS PA’s Chicago is All That Jazz 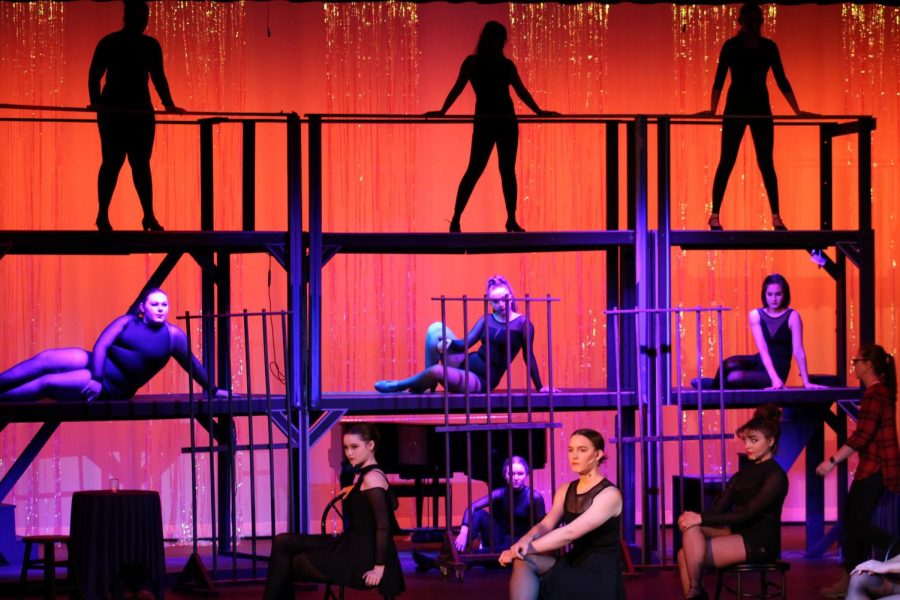 Pop. Six. Squish. In South's production of Chicago, they perform the iconic number "Cell Block Tango". The merry murderesses of the Cook County Jail sung about killing their husbands.

On December 9th-12th, South Forsyth’s Advanced Musical Theatre performed the high school edition of the award-winning musical Chicago. Through the jazzy music and famous Fosse choreography, the SFHS PA program fully immersed the audience in the Roaring 20s and the lives of notorious murderesses Roxie Hart and Velma Kelly.

Bob Fosse and Fred Ebb’s Chicago opens with a tale through Velma Kelly’s song “All That Jazz” as she sings about the wild times of the ’20s. This opening number also introduces the premise of the show, as Roxie Hart kills Fred Casely when he tries to end their affair. The show revolves around Roxie and Velma’s challenges to escape the clutches of death row after murdering their lovers.

Through flashy songs and dances, the two murderesses navigate through lawyers, legal battles and the press, trying to prove their innocence.

The Advanced Musical Theatre class worked meticulously since August to put together this amazing and more serious show. The dance-heavy production required large amounts of patience and after-school commitment to string each number together. Both of the casts worked hard to polish their characters to perfection, and every single performer sold their character to the audience, portraying more than just the character’s story.

For example, Senior Mackenzie Beenken brought the character of Roxie Hart to life in the opening cast.

“The biggest and most poignant obstacle in my path was that of Roxie’s exuding confidence,” Beenken admitted. “This confidence is not something I can say Mackenzie Beenken has on the day-to-day. I tend to question my actions, hiding behind quiet smiles and compliments rather than being forward in my boldness.”

“Being confident in who I am has always been a struggle so bringing a character to life who envelops confidence at every second was tough. But, it was oh-so-rewarding because Roxie has given me the gift of seeing worth in myself. She has allowed me a new sense of boldness I would otherwise have never been able to unlock. She whispered to me in the quiet moments that I, too, could be proud of who I am, with no shame of being ‘too much.’ Roxie introduced me to a new part of my heart and I could not be more thankful for that,” she continued.

Beenken, along with the other talented cast members, were challenged by the serious and darker tones of the musical. In previous years, South’s shows have been more upbeat and comedic such as their rendition of The Addams Family earlier in the fall and Something Rotten! in the spring of last school year. However, the performers rose to the occasion and had fun creating the atmosphere of the show.

“My favorite part about Chicago is getting to bring the dark humor of it to the stage. It’s something we haven’t attempted to do before, so working with it is a fun thing to do,” said junior Kiera Croston who played Annie (Six) in the opening cast.

“What was difficult for me was having to act more mature, and have the anger that is carried in some of the numbers. I am usually cast as a more childlike or comedic character of the show, but in Chicago, my character carried herself more maturely. Along with this being angry in the show was difficult because I don’t become angry very often in real life, so to portray that was something I had to work on at home,” Croston explained.

Furthermore, the cast of Chicago also worked closely with several choreographers to develop the show’s movements and dance numbers.

Chicago is famous for the burlesque dance style that Bob Fosse created. In this jazzy style of dance, there are many jarring movements as well as awkward contortions to contribute to the tension of the songs. Regardless, Fosse’s style is immediately recognizable as he incorporates a lot of isolation, especially in the wrists and shoulders.

South hired professional choreographer Rose Clark to choreograph a few of the numbers in order to recreate this iconic style. However, junior Brendan Turner studied Fosse’s techniques on his own and choreographed the rest of the show.

“Fosse is the main style of dance in Chicago, and I have less experience with this style which was a challenge at the beginning,” stated senior Jessica Branch, who played Velma Kelly in the closing cast. “But after working towards building my technique and flexibility throughout the entire process, the outcome was so exciting and very rewarding.”

Sophomore Tyler Fortier, who played Wilbur and Irving in the “Cell Block Tango” number, also added that “Trying to learn how to isolate each and every part of our bodies was really difficult. We constantly drilled them until we got them down.”

But there was more to the show than the performance. The set design and the costumes pulled the entire production together. Chicago’s tech built several structures for the show that placed the set right in Cook County Jail. Sitting upstage during the show, there’s a three-story platform meant to resemble cell blocks. The technicians built this platform from scratch, and the actors moved, danced and stomped all over the sturdy structure.

The costumes were simple yet they were vital to the show’s atmosphere. All of the cast members wore black dance gear such as leggings and leotards and mesh. These clean designs drew the attention of the audience to the true talent of the actors since there were no flashy distractions. The skin-tight costumes also allowed for the audience to focus on individual movements and choreography that was also a must-have in a production of Chicago.

Overall, the show’s success made its mark in the Performing Arts Center, and everyone couldn’t be more proud of the hard work and effort put into this production.

“This show is joy,” Beenken stated. “It is one that has allowed growth in the hearts of so many, and it is that growth that encapsulates all that Chicago is. It is the most impressive show I have had the pleasure of being a part of, and it is one I will never ever be able to forget. So thankful to our directors and this cast for pouring all of themselves into this experience.”

Don’t forget to watch Mackenzie Beenken and the rest of the Chicago cast on December 17th and 18th!