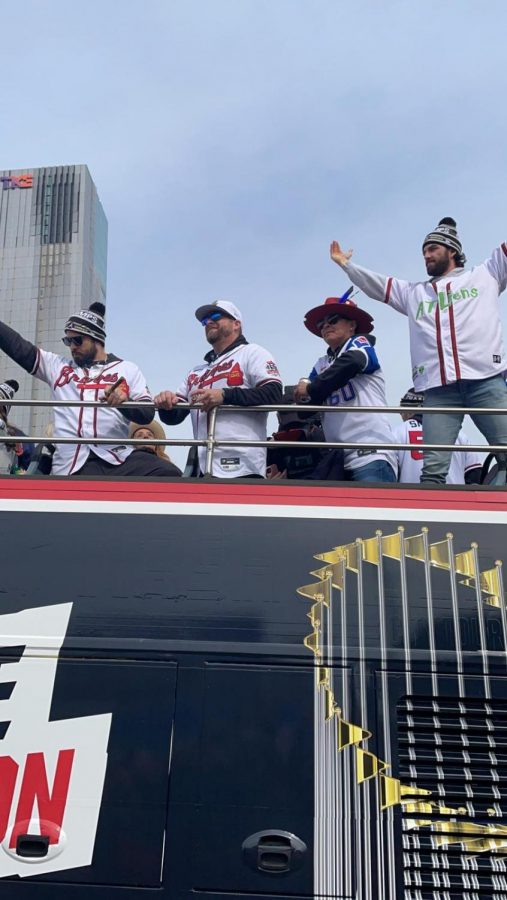 Used with permission from Parth Mendpara

The story of the underdogs. The Atlanta Braves take their accomplishment to the streets of Atlanta and Cobb county. The Braves fans and Georgians cheered them on as they rode around in trucks and buses.

On the night of November 2nd, the Atlanta Braves won 7-0 against the Houston Astros in the 6th game of the World Series, crowning them this year’s World Series Champions.

This is Atlanta’s second World Series win since 1995, which made the victory a good old fashion underdog story.

On Friday, November 5th, they took the celebration to the streets of Atlanta in a spectacle of a parade, garnering applause from the entire city.
The World Series
Last year, the Atlanta Braves fell short against the Los Angeles Dodgers in a 4-3 loss in game 7 at the National League Championship Series (NCLS), perpetuating the Atlanta sports curse. But this year the Braves worked diligently to ensure their victory for NCLS, and they overcame the might of the LA Dodgers winning 4-2 in game 6.

In the World Series, which can consist of up to seven games, the Atlanta Braves and the Houston Astros fought back and forth during each game, and many fans were at the edge of their seats the entire week, watching the leading team change in the matter of a swing of a bat.  The Braves’ success pushed them to great heights as as they also cut the World Series short at Game 6.

In Game 1 of the World Series, the Braves took the first victory, giving them a lead in this championship gauntlet. But Braves fans continued to hold their breaths as the Astros managed to tie the Series in Game 2. From there, Game 3 was in the air for both of the teams, but ATL grabbed the opportunity to take back the lead 2-1. In Game 4, it was a tough battle between both of the teams, with the Braves eventually making the comeback in the 7th inning, winning the game 3-2.

With a 3-1 lead in the Series, the Braves only needed one more winning game to secure their victory as World Series Champions. In Game 5, it looked as if the Braves were going to end the Series once and for all because they racked up 4 runs only in the 1st inning. But right off the bat, Houston quickly took the advantage and usurped the victory from behind, winning the game 9-5.

This shameful defeat gave ATL the wake-up call they needed to get their head in the game for Game 6. Although the Atlanta Braves still held the lead 3-2, Houston’s victory meant they still had the chance to grab the title from right under their feet.

Luckily, the Braves gave it their all in game 6 and didn’t even give the Astros a chance to score.

In every other inning, the Braves racked up runs. In the 3rd inning, designated batter Jorge Soler hit a 3-run homerun, starting off the series of home runs for the Atlanta team. Following suit in the 5th inning, shortstop Dansby Swanson’s 2-run homerun placed the Braves 5 points ahead of the Astros. In the same inning, first baseman Freddie Freeman’s strong hit off of the left-center wall scored another run, ending the 5th inning with a strong 6-0 lead.

The last point came from Freeman’s single-run homeroom at the top of the 7th inning. From there, none of the teams got any points in, announcing the Atlanta Braves victorious after the scoreless 9th inning.

Not only was their offense strong through and through, but the defense ensured the clean and painless triumph against the Astros. Pitcher Max Fried pitched six innings straight without Houston scoring in a single run. In total, Fried only let four hits slip past him, with the brilliant addition of six strikeouts.

Pitcher Tyler Matzek relieved Fried in the 7th inning and struck out four batters in the two innings he pitched. Finally, closer Will Smith pitched the final inning for the Braves, ensuring that the Astros wouldn’t score for the rest of the game.

Parading through ATL
After the Braves’ clean victory, the team returned to their home city to celebrate the end of the 16-year drought for Atlanta’s MLB team. On Friday, November 5th, the baseball team and their families made their way through the city of Atlanta and through Cobb County to cheer alongside the Georgians who have been waiting patiently for another World Series Championship trophy.

South senior Lindsey Daugherty went to the parade that Friday to make her mark on Atlanta history. Living in Georgia, she has been a long-time fan of the Atlanta Braves, cheering on the baseball team ever since she was little. Daugherty and her family joined the masses to elevate the city with their love and support.

“The parade was so fun because everyone there was excited about the win,” she further commented. “The energy was unreal and the city of Atlanta felt united. I was most excited to see Freddie Freeman because he has played for the Braves for so long, and he deserved this win. He has always been my favorite player, and I loved watching him in the parade.”

At noontime, the entire team and their families poured out into the streets of Atlanta in a variety of vehicles. They started the parade at the landing spot of Braves legend Hank Aaron’s 715th homerun to pay homage to the African-American homerun champion.

After making their trek through the city of Atlanta in pickup trucks and buses, the team returned to Truist Park and finished the rest of the parade through the streets of Cobb county. At the park, many players, including Freddie Freeman, made a speech about the many obstacles they faced and the hard work they put in to ensure their win.

Freeman opened the speech with, “If this wasn’t the epitome of a team and a team effort, I don’t know what team really means then. This group of guys […] we pulled on the same rope and tugged on it when no one believed in us, and we pulled it all the way to the championship.”

Overall, the park filled with tears and laughter as everyone in Georgia united to celebrate this win for the city of Atlanta. We cannot wait to see what Freddie Freeman, Jorge Soler and the Braves have in store for us next season.