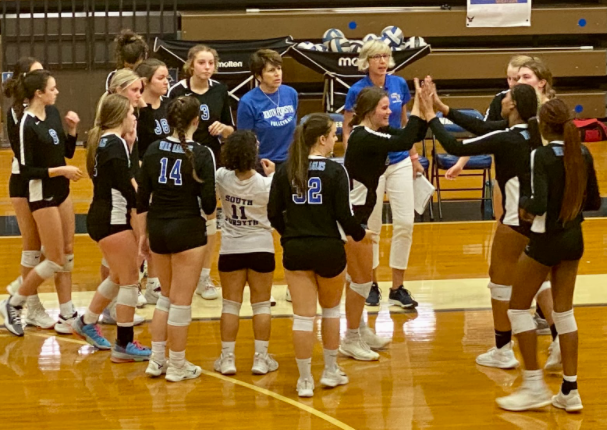 Team Support. Players come together for a huddle, and come onto the field as champions in spirit. Even though the Varsity Volleyball team may not have won the game on September 28, they still did extremely well and played hard!

South Forsyth High School’s 2021 volleyball season officially closed after the Varsity Girls’ team made immense strides in the right direction. The girls’ team played enthusiastically through the season, pioneering their way in each competition and tournament.  Looking back, it’s clear to see all the effort, magic, and love that went into this year’s season.

The team’s successes aren’t a result of overnight miracles; instead, it reflects the team’s hard work during the season. They’ve done it all: practiced over the summer, participated in training camps, endured much physical training, and practiced almost every day. Even in the face of hardship and adversity, the volleyball team never lost hope.

“We’re a young team that has battled with some injuries and illness early on, so we never really quite found a good rhythm… and we’re now starting to find that rhythm,” said Head Volleyball Coach Steffi Legall. “But again, the story really to me is that this team never stopped fighting and never stopped believing in each other. They enjoyed coming to practice every day, and that was really what I take away from this season.”

Overall, they played hard and won four games against Calhoun, Norcross, North Gwinnett, and North Paulding high school. Despite their victories, they did suffer a few losses as they faced hurdles along their path to success. One of their most memorable games occurred on Tuesday, September 28, when SFHS and Forsyth Central High School’s varsity volleyball teams competed in an eventful match. This was also the day South’s team held its annual Senior Night in order to commemorate their talented senior players.

The stands at the SFHS vs. FCHS game were filled with crowds of friends, families, and teachers as they cheered on their team. Forsyth Central won the initial coin toss and started off the game. At the start of the first of five sets, South earned the first point and continued to take the lead. Their strong teamwork skills supported their win of the first set.

Key players such as Angelica Conde Borres, Ansley Davis, and Captain Arielle Estes, with the rest of the team’s combined effort, gave South an early lead in the 2nd set. However, the lead didn’t last as long as South may have hoped, as Forsyth Central slowly started earning points as well.

In the second set, Amelia Paschall, number 20, impressively blocked a strong hit from Central at the net. Her strategic plays helped South gain a point and tied the score 24-24.

However, Central took the lead at the end of the second set, marking the beginning of the third set. Despite their challenges, South was determined to show off their skills and win back the lead.

The third set was much like the last with Central leading and South closely behind.  South played hard and worked to earn their points, but they came up a just little short as Central ended with just a few more points.  In the end, Forsyth Central scored the most points, changing the direction of the game with their win.

At the beginning of the 4th set, the crowd felt tension and excitement building up in the air as the set score was 1 to South Forsyth and 2 to Forsyth Central. This set consisted of many excellent passes, blocks, hits, and sets by both teams. South once again made the first point; however this time, they kept the lead and won the 4th set at the score of 23 Central to 26 South. With the sets tied at 2-2, the 5th set began.

In the final set, both teams scored points as if they planned to take turns: one point to South then one point to Central. The crowd was on edge, inspiriting, emblazoned, and so very present.

Before the end of a game, the head coach called a quick team huddle. Coach Legall motivated her team with a pep talk, and reminded the talented young players what they are capable of.  Throughout the season, She has coached the girls to believe in grit, determination, teamwork, and hard work.

These ideals are prioritized by Amelia Paschall, a senior who plays defensive specialist, as she shares her love for volleyball.

“Volleyball is very much a team sport so without a good, connected team you just won’t perform well at all,” said Paschall. “When you step onto the court, you have to be able to leave it all on the floor and work the hardest you ever have.”

After the huddle, the team returned to the fifth and final set as they chanted their usual “1-2-3 South” cheer. Both teams continued to score incredible wins with a tied score, but Forsyth Central broke the tie making the score 8-7. The final few points were extremely close, but ultimately Forsyth Central High School’s team reached a score of 15 first, the winning number of points for the 5th set. With that, the game came to an abrupt end, with the 5th set ending at 15-9. In the end, South won two of the five sets while Central won three of the total sets. While South faced a loss during this game, the game was a big reminder to persevere while facing obstacles.

Throughout the game, the team not only showcased their skills but exemplified the power of teamwork. South’s players gave us an inside look into what it means to be a great team player: hugs, high-fives, bright smiles, and genuine care for their teammates were evident during the game. The performance, skill, and determination seen at this game – and throughout the entire season – was outstanding, and even though South Forsyth’s volleyball team lost, they fought till the end, and had fun doing it.

Senior Amelia Paschall explained, “Even though we didn’t win that game, we still fought really hard this entire season and did everything we could to get better. I love this sport, and I am so grateful to have had opportunities to play and get better!”

In the end, the SFHS varsity volleyball team had a season of growth, and we are so proud of their efforts and accomplishments.