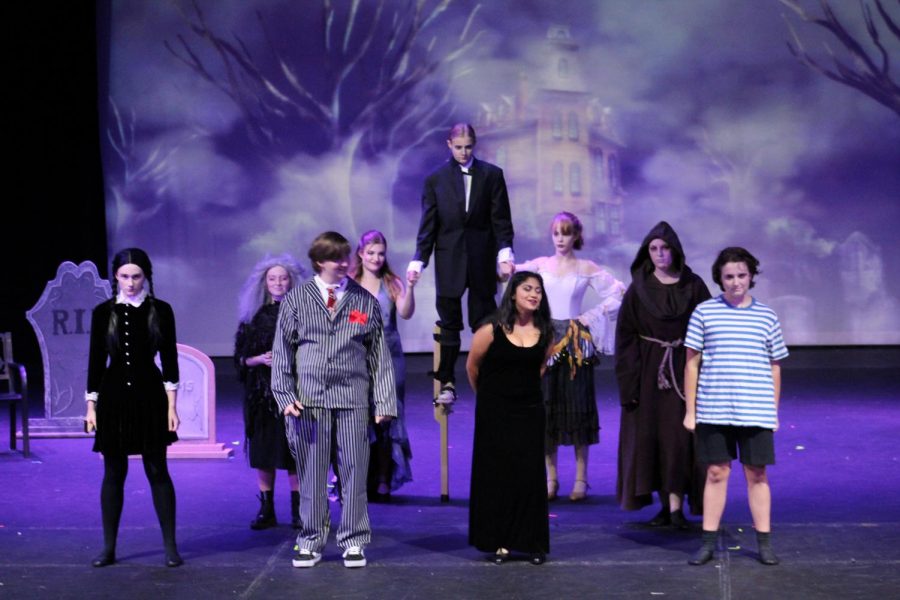 When you're an Addams. Gomez Addams introduces his family in the opening song. This fun and eerie piece set the mood for the rest of the production.

During The Night of One Acts, the SFHS Performing Arts program showcased their one-hour rendition of the 2010 broadway musical The Addams Family along with Advanced Drama’s “The Old Man and the Old Moon” October 7th-10th.

The Addams Family was a fan favorite as the upbeat music and catchy choreography helped move the quirky story along.

Beginning as a cartoon strip in the 1930s, The Addams Family grew traction in the media and finally aired as a sitcom in 1964. From there, there were many adaptations of the original story surrounding the abnormal and eerie family attempting to assimilate into the average American life. Eventually, in 2010, Andrew Lippa’s Broadway adaptation came to life with a slight twist on the original material.

Lippa’s musical follows 18-year-old Wednesday Addams who has a secret: she has a boyfriend, and even worse, they want to get married. After young Wednesday invites her boyfriend’s family over for dinner, both families try their best to make it through “One Normal Night” while confessing many secrets about family, love, and especially, craziness.

The musical theatre combo class cast the show in late August, giving the class a little over a month to prepare for this one-hour musical. Due to this short amount of time, the company faced many obstacles and hardships such as having to quickly memorize all the lyrics, lines and choreography for the show.

With a dance-heavy musical, the performers had to frequently rehearse during any amount of free time they had, which included sacrificing IF time and Saturday mornings to put the show together.

Freshman Sanya Jani, who was part of the ensemble, said, “I experienced a few setbacks, but it was mainly trying to learn all the choreography in the short amount of time we had. I would try to practice frequently to remember the choreography, which helped a ton.”

On top of the compacted rehearsal time, there were also uncertainties at the beginning of the year regarding COVID-19 restrictions. Taking precautions, choreographers constructed their dances in a socially distanced manner similar to the previous year; however, masks were no longer required for both performers and the audience. After a year of acting behind masks, actors now grappled with using all of their facial features to express the emotions.

Junior Rachel Land, who played Alice Beineke and was a part of South’s Oklahoma! and Something Rotten said, “The masks definitely affected our singing. When you sing, breath support is the one thing that gets a note across. Singing and dancing are hard enough, but with the added issue of restricted air, your chances of a note not coming through or falling flat increase by a lot. I’m so thankful that we took the necessary precautions to keep ourselves healthy, but I am grateful that the fortunate circumstances and the decrease in cases allowed us to perform without them.”

Luckily, the cast and crew managed to pull together an amazing show that had the audience laughing out of their seats. The scene that garnered the most laughter was the “Full Disclosure” dinner table scene. This scene takes place when the Addams and the Beinekes families finally sit around the dinner table, and Morticia reveals a certain “game” the family always partakes in at dinnertime.

The game, Full Disclosure, has each character confess their deepest and darkest secrets at the dinner table. Despite the dark undertones of the game, the actors delivered each joke with impeccable comedic timing that truly encompassed the irony behind the musical. Furthermore, a cheesy but loveable song interjected itself into each set of lines to emphasize how the Addams family enjoys the torture and dread of the game.

“My favorite part about Addams Family has got to be the dinner scene where the Beinekes and Addams both gather around the dinner table to play Full Disclosure,” said freshman Saishankar Sadhu, who was part of the ensemble. “This scene is really interesting because it displays all the character’s personalities and how they are different and unique. It is also really funny to see Alice’s argument with Mal because Alice is under the spell of a potion, so she turns goofy and acts like a lunatic which is really interesting to watch. Overall this is the most iconic scene in the whole show!”

While the show’s music and dance garnered much of the audience’s attention, the rented set pieces and costumes truly supported the show’s overall “deceased” atmosphere.

At the beginning of the show, the ancestors crawled out of a crypt labeled “Addams”, revealing the ensemble members in unique garments of gray and black. Junior Maddie Fischer even stood on stilts to accurately portray the Frankenstein-based character, Lurch, as a tall giant.

From gravestones to a coffin, the set pieces truly brought the show to “death”. In fact, the most notable set-piece was Pugsley’s torture device when Wednesday sings “Pulled”.  The audience gasped in amusement seeing the character rolled out on a vertical wooden board with all of his limbs being chained down to the device.

All in all, the fall show was yet another success for the musical theatre combo class. For some, this was their first-ever musical, and for others, it was their first-ever musical without wearing a mask. Regardless, it was a great show that brought together performers with differing backgrounds in musical theatre. The comedic lines, the memorable songs and the very lovable characters will live on through the cast and crew as they continue their journey in the musical theatre combo class.

My first time being in a high school production was amazing!” Sadhu said, “The props, actors, crew, technicians, teachers, and the overall stage was wonderful. I was usually involved with elementary and middle school plays, so having Addams Family be my first high school play was a great honor because it showcased the professionalism and effort that is found in high school plays that I admire.”

Click here to view a gallery of pictures from the show!