A story of memory: SFHS’s PA performs “The Old Man and the Old Moon” 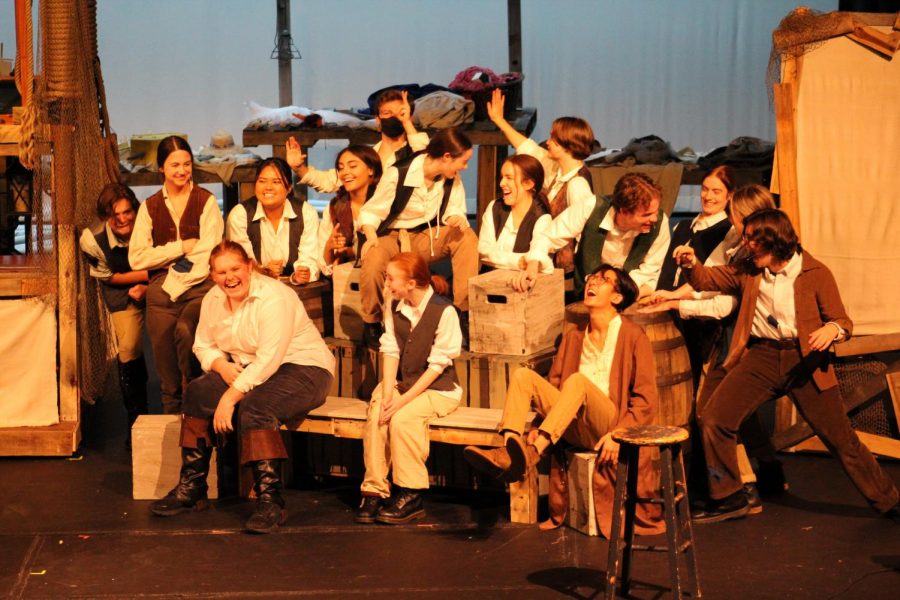 Rough and rowdy. In the play, the Old Man walks into town to find a group of restless sailors. The Old Man deceived this ragtag group in order to find his wife.

On October 7th-10th, the South Forsyth High School Performing Arts Program presented two amazing shows during their Night of One Acts. SFHS’s Musical Theatre Combo class started the evening with their one-hour version of the musical comedy, The Addams Family, and the Advanced Drama class concluded the night with their retelling of the epic tale “The Old Man and the Old Moon” (TOMATOM).

Pig Pen Theatre Co.’s “The Old Man and the Old Moon” is a maritime adventure that tells the story of the titular Old Man whose job is to refill the moon every night so it can maintain its luster. The Old Man’s wife, the Old Woman, feels as if their life is unchanging and unmoving, and she is discontent with the way they are living. Suddenly, she remembers an ominous melody, and the Old Woman disappears in the night to follow the sound. The Old Man awakes to find that his wife has traveled West for reasons unknown, and he deserts his duty to fill the moon in order to find her.

This nautical narrative explores various themes such as friendship, honesty and the importance of memory as the Old Man ventures into the unknown for the first time in his long life.

The Advanced Drama class cast the show in May before school got out for the summer. With a few cast members having to both play instruments and act in the show, the musicians learned the music over the summer so they could focus on lines and acting during the school year. Most notably, senior Morgan Crump, who played Mabelu, a patron, and the dog, picked up the accordion, and sophomore Brooke O’Day learned how to play the banjo.

“My favorite part about ‘TOMATOM’ is the music. This was the first show where we had live musicians. Being able to play the drums in this show was an incredible experience,” exclaimed senior Laney Bingham. “I truly feel like music is meant to be felt, and I think the audience all felt something after seeing the show.”

Bingham, who played the drums for “TOMATOM” and the character of Llewellyn, further mentioned, “This was the first show where I had to play an instrument and play a character all at the same time. It was definitely challenging having to know my music and my lines all at once. But I managed to conquer those challenges and it helped me grow as both an actress and a musician.”

On top of their superb music accompaniment, their set-pieces supplemented the atmosphere of the setting. The “TOMATOM” tech worked meticulously over the past few months to build, paint and craft many of the set pieces from scratch. The tech riddled the stage with barrels, wooden boxes and crates, and tables to resemble the dock of a ship. There were also elements of shadow-puppetry on stage to further the narration of the story.

However, the most eye-catching piece of equipment was the massive platform on center stage that served many purposes as the adventure progressed. It transformed from a shop to a ship to the belly of a fish and even to a hot air balloon. The cast members worked diligently to move the enormous pieces around during scene changes to create a smooth transition in order to distinguish between the diverse settings.

Furthermore, the most notable scene in the show was the scene that took place in the belly of a fish. In “TOMATOM,” the Old Man finds himself stuck in the belly of a fish after being thrown overboard during a storm. In the belly, he meets a man who has gone mad after years and years of being stuck inside the fish. This scene is a drastic and jarring change in terms of lighting, themes and songs. It is a darker place within the story as the Old Man is stuck and almost loses all his hope. Senior Poom Punmaneeluk, who played McWallender, says that the fish scene is his favorite scene of the show.

“Being a part of the fish scene and interacting with the Old Man is super fun,” Punmaneeluk beamed. “I love that scene because it’s such a heartfelt moment with Cash (The Old Man). The lighting in the fish was also amazing! My family got a few pictures from the fish and it was beautiful.”

Furthermore, Advanced Drama effectively differentiated between each individual character in the play. Most of the actors play multiple characters throughout the story. For example, the butcher at the beginning of the show later assumes the character Ben, and eventually, the lost lieutenant, McWallender. For the audience, it may be confusing to decipher when a character ends and another character begins, but the SFHS actors embodied each and every role to help the audience understand the story easily.

Overall, the show brought life to the end of the night after many audience members watched The Addams Family. The heartfelt adventure brought tears to the eyes of many, but especially, to the eyes of the senior cast and crew who made the show possible. This is the last fall show for the seniors, and they will never forget the bonds they made and the skills they developed throughout their years in the performing arts program.

“I will miss the experience and the connections I have in that class,” Punmaneeluk said. “Every single person in that class is a good friend of mine, and I don’t know how I would be who I am without them.”

Click this gallery to view the pictures from the show!