Where Magic and History Collide: A Shadow Bright And Burning Review 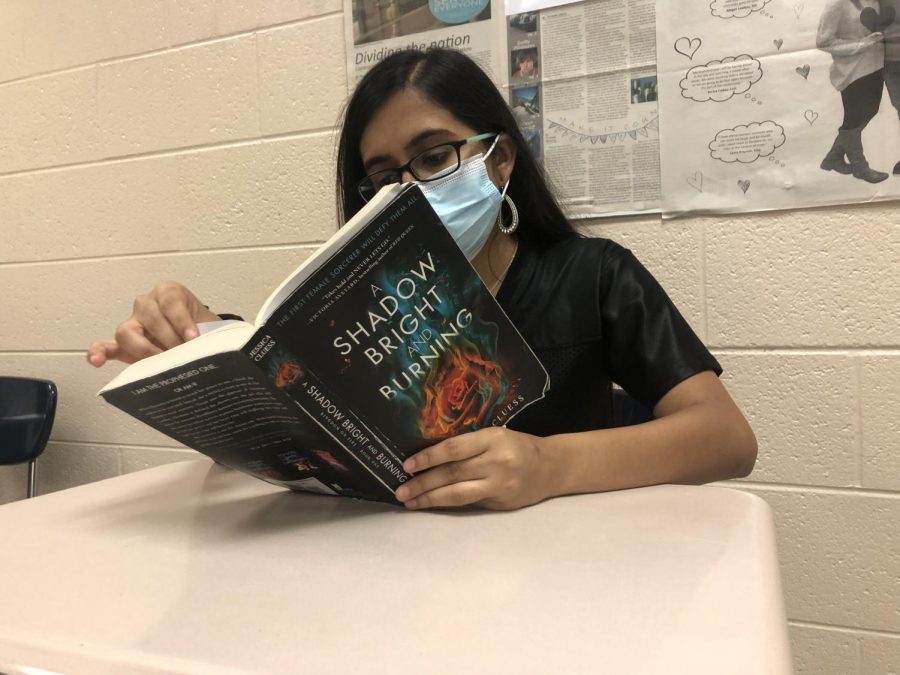 Rising from the ashes of life. (Pictured above) Senior Shree Delwadia is reading an intricate novel, A Shadow Bright and Burning, which features a variety of characters such as sorcerers, magicians, and demons. One of the best scenes from the book included the challenges that Hernietta faced to save her friend, Rook.

The events of A Shadow Bright and Burning cause the main character, Henrietta , to face many obstacles, including the knowledge at one point that she is set to lose her life at dawn the next morning battling an evil demon named Korozoth. So how does Henrietta finally get the role of her dreams as the first female sorcerer of the queen’s guard? All this and more goes down in the 2018 YA Fiction novel A Shadow Bright and Burning.

Author Jessica Cluess’ debut novel is a great read for fans who enjoy magic, fantasy, history, and romance. The main character is a 16 year old girl named Henrietta Howel who is forced to reveal her flame-base magical power to rescue her longtime friend.  She expects her death to come after that, but a sorcerer named Cornelius Agrippa invites her to train under his authorization and teaches her how to become one of the queen’s royal sorcerers.

From here, the story ignites through the action-packed adventures of Henrietta and the other sorcerers.

The author likes the Harry Potter series so much that her characters even bear some physical resemblance to characters from JK Rowling’s famous Wizarding World.  Jessica Cluess also mimics the “neither one can live while the other survives” line from the famous Harry Potter prophecy in her series, which will play out in the remaining books of the series, currently entitled Kingdom on Fire.

But beyond characterization and plot points, the two series have few similarities. Set in the time during the start of Queen Victoria’s reign (1837 -1901), Shadow Bright and Burning has a unique plot and characters. The story begins when demons known as “the Ancients” attack London, leading to some tension-rising life-or-death situations.  For instance, when a character named Palehook exposes that MC Henrietta is a magician, the queen sets her execution at dawn the next day. This action inspires a thrilling rescue operation.  As the reader, I knew they were going to rescue her, but what really intrigued me is the part of the story that reflected the main character’s level of control and coming into her powers.

In conclusion, A Shadow Bright and Burning is a really good book where magic and history collide.  In the end, Henrietta finally receives the title of the first female sorcerer after an adventure of obstacles.  It is bound to be interesting to continue the story in A Poison Dark and Drowning, the next installment in the Kingdom on Fire trilogy.  Ultimately, I would recommend this book for fans of the Harry Potter series and anyone who enjoys action and adventure combined with fantasy.