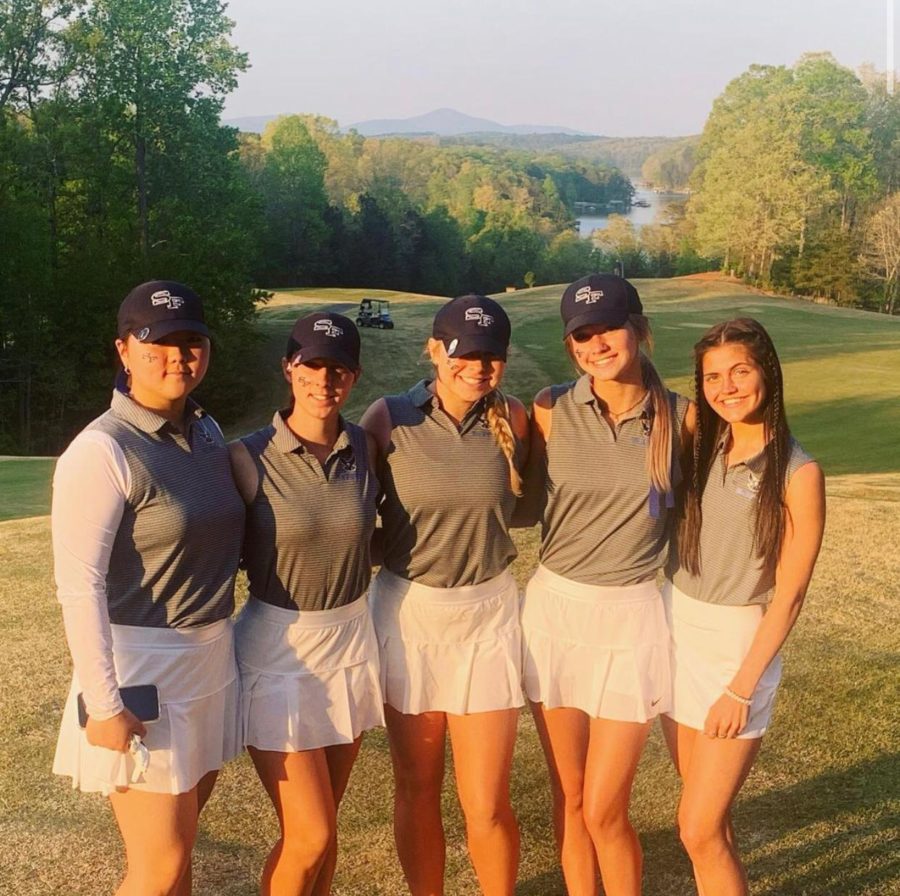 Used with permission from Nicole McClinton

An unforgettable season. (Pictured from right to left) Hailey Yeon, Kennedy Arnette, Elise Forberg, Emma Reid, and Abigail Dotson are esctatic as they prepare for the upcoming state tournament in May. They have truly advanced their skills throughout the season and cannot wait to work towards a state championship title.

Despite the challenges of the pandemic, the South Forsyth High School girls’ golf team worked to make this year quite memorable. While this year’s team consisted of a few new players, each member dedicated themselves to show off their skills in each tournament throughout the season.

“COVID-19 has impacted practices in a big way,” said head girls’ golf Coach Nicole McClinton. “Golf is one industry that has actually grown during the pandemic, so it is extremely hard to get out and practice because courses are making so much money off of tee times that they don’t want to close a course down for tournaments or let schools practice for free.”

As for practice, the team practices once a week at the Windermere Golf Course along with the personal practices that each athlete has with their own swing coach, aiding them in their golfing techniques. Other than practice, the team often has a few tournaments or matches during the week where each player showcases their skills.

The team truly displayed their exceptional skills during the multiple tournaments throughout the season. At the Lady Wolves Invitational, their first tournament of the season, the SFHS girl’s team 1 finished 2 under par. In other words, they finished 6th out of the 25 teams, which is a great start for the season. This team consisted of Coach McClinton, Hailey Yeon, Kennedy Arnette, Elise Forberg, Emma Reid, and Abigail Dotson. While the team is fairly young, they have practiced for many hours to strengthen their swing and overall golf skills. Further in the season, at the Town Lake Par 2 Classic hosted by Cherokee High School, junior Kennedy Arnette and senior Elise Forberg brought home some winning plaques for the 2nd place low team score as a pair.

Shortly after, the entire team placed 2nd at the 2021 Esther Cannizzo Girls High School StableFord Tournament. This tournament served as great preparation to get ready for the area tournament on April 20th at the Chestatee Golf Club. During this area tournament, each player played each round with precise technique and concentration. They placed 2nd place at this tournament, advancing them to the 7A state golf tournament which will be held in Moulterie, GA.

As they prepare to go to the state tournament, the team looks forward to the valuable memories they will make along the way.

“Alongside the team dinners that the team has after their tournaments, getting ice cream at Sonic when traveling to state is an annual tradition,” said Coach McClinton.

Ultimately, this SFHS girls’ golf team has been showing off their skills and bringing home a number of achievements to the war eagle nest. We wish them the best of luck as they compete at the 7A state tournament on May 17th!