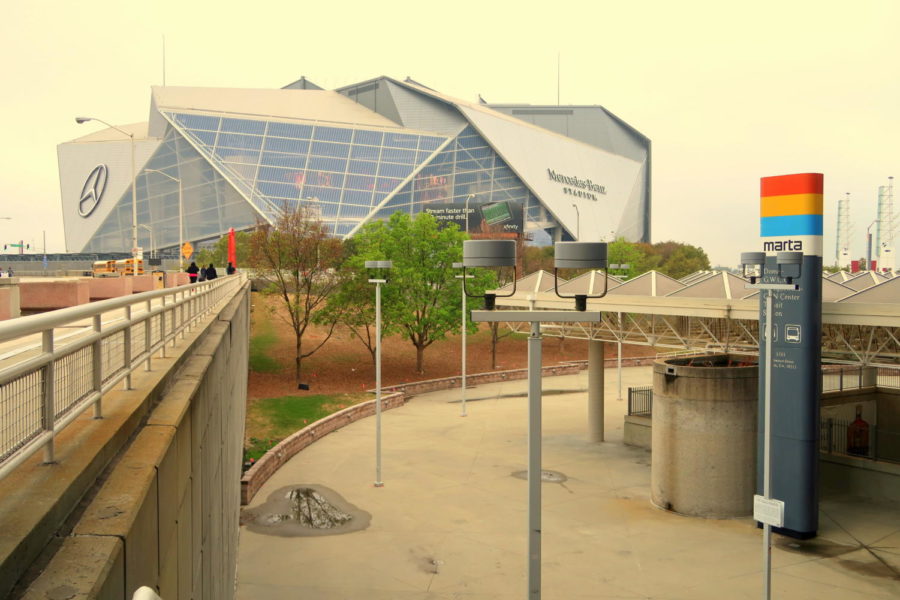 The Mercedes-Benz stadium. The stadium is filled with life again, granted, not as crowded as before, but still full of excitement. The attendees and fans watching from home cheered when the stadium lit up with flashing lights and bursts of fire whenever the ATL team scored.

On Saturday, April 21st, Atlanta (ATL) United faced off with Chicago Fire for their third game in the 2021 MLS (Major League Soccer) season. The match took place at the Mercedes-Benz Stadium in Atlanta, the first game at the famous stadium for the season. The game was intense, with three ATL United players and one Chicago player receiving a yellow card. ATL United, clearly reinvigorated with motivation from being back on their home turf, played a phenomenal game, winning 3-1 against Chicago.

The first season that ATL United joined the MLS, the team set multiple new records and won the MLS Championship. Since that memorable first season, the ATL United team faced many changes with new coaches and changing teammates. The new team is doing well, but ATL United fans are waiting for the impressive winning streak and skilled play from before. This game fulfilled the expectations of fans and proved that ATL United is as strong as ever, and a team to look out for as the MLS season continues.

Season-ticket holders and other special guests could to attend the match at a limited capacity. With the stadium filled with life again, the match had a new intensity. Fans were excited to see that the familiar special effects (fire, train horns, and flashing lights) were back, exciting attendees in the crowd and those watching from home.

In the first half, Ezequiel Barco (midfielder and #8) scored a goal at the 23rd-minute mark. ATL United was given a free-kick a few yards outside of the Chicago goal box. Barco took the kick, which deflected off of a Chicago player and bounced back toward him. Seizing the opportunity, Barco ran up to the ball and took another shot, which landed in the top left-hand corner of the goal. A few minutes later, Jake Mulraney got a yellow card for a foul on Chicago. The half ended 1-0 ATL United.

The second half was even more intense than the first. At the start of the final half, ATL United subbed out Brooks Lennon (#11) and Jack Gurr (#26) took his place in defense. Almost immediately after, Chicago midfielder Luka Stojanovic (#8), had a clean shot on the ATL goal and scored. Brad Guzan (#1), the goalie for ATL United, was furious about the goal, but he quickly got his head back in the game and remained on high alert, keeping an eye on Luka.

At the 65th minute mark, Chicago defender Johan Kappelhof (#4), unwillingly assisted the ATL United team by scoring in his own goal, making the score 2-1 for ATL United. The ATL team, eager to score another goal to secure a win, had two substitutions afterwards. Jurgen Damm (#22) subbed out Marcelino Moreno (#10) and took his place in midfield, while fan favorite Josef Martinez (#7) subbed out Lisandro Lopez (#15) and took his rightful place as the striker.

In this season, Martinez has only played in the second halves of games, subbing in around the third quarter. Fans speculated that this may be because of his recent injury, and the coaches want to keep him healthy and avoid another injury. They also may be saving their secret weapon for the second half so that he is fresh while the opponent defense has been worn down.

At the 70th minute and the 81st minute, Barco and midfielder Emerson Hyndman (#20) each received a yellow card. Yet this did not dishearten the players, as Hyndman scored a goal on Chicago shortly after, securing the win for ATL United 3-1.

The match was a great achievement for ATL United, bringing hopes for another winning season similar to the impressive inaugural season. Fans are excited to see how the team does this year with the new head coach, Gabriel Heinze. Fans can cheer on the ATL United team at their next game, and access the MLS game schedule here.