More than just Melanin: the striking impact of Colorism in our Community 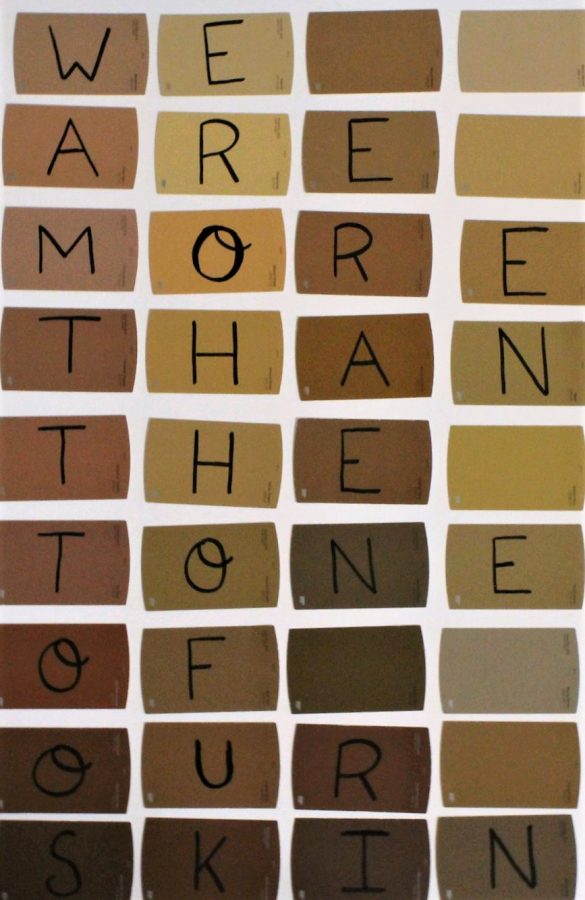 We are more than the color of our skin. Colorism is prevalent in every culture on the planet, both subconsciously and outwardly. Throughout history, people have looked down on women with darker skin. As a result, these women have experienced negative mental and physical health effects.

In the wake of various social justice movements came the call for racial justice and equality throughout the nation. And while issues like these on a large scale are extremely important, microaggressions that people with dark skin face every day are equally vital. People, especially women, of the Asian and African communities, feel this discrimination on a daily basis. And while all colorism may not stem from racism, our predisposed notions to believe “lighter is better” can lead to more radical ideas and contribute to the very issues our country faces today.

There is a minute but important difference between racism and colorism. Racism is discriminating against people of another race, but colorism happens within the same race. Whether it’s preferring lighter skin or tan skin, the issue happens in multiple races- specifically the Asian one. It has a very long history that traces back to the creation of India.

“The foundation for colorism can be traced back to European colonization, even as far back as Aryan invasions in India. Historically, colorism was developed as a way to distinguish between different classes. Darker-skinned people did more hard labor or were out in the sun more for their occupation, where light-skinned people had less sun exposure,” explains junior Shivani Murugapiran.

And not only is the foundation of colorism historical, it’s also scientific. Frontiers in Psychology found that the amount of contrast of a woman’s face serves as a sign of her perceived age, and oftentimes, attractiveness. Faces with a higher contrast within their features tend to look younger and more attractive, and this often causes people with darker eyes and hair to lighten their skin and vice versa. This class divide as well as the perceived “aesthetic” of facial contrast may seem small, but they greatly affect people’s everyday lives.

Skin Lightening
When I (co-author Saahithya Gutta) was younger and we’d go to lots of parties, my mother would always put Fair and Lovely’s powder on my face. Whenever I asked her why, she would give me some vague answer or just tell me to hurry up. Colorism has been around for so long that it’s become internalized and created practices that can no longer be explained.

While Glow and Lovely was never meant for skin-lightening, many other brands that dominate the South Asian beauty industry were. These products often contain harmful chemicals such as mercury and a depigmenting agent called hydroquinone both of which are poisonous and can lead to kidney failure.

“I believe that brands like Fair and Lovely and other skin whitening products thrive off of people that are self-conscious about their skin tone, to then advertise that having a darker skin tone is not attractive and pleasing to others,” says junior Minakshi Shivananda.
Makeup
In addition to skincare, another area where colorism plays a huge role is makeup, specifically foundations. Throughout the past, several makeup brands refused to cater to darker-skinned individuals when formulating foundation shade ranges. While this is a much larger issue in the Black community, it also affects darker-skinned Asians who may not be able to find their shades, and have to stick to “settling.” The launch of Fenty Beauty by Rihanna brought a lot of attention to this issue, as they made a splash in the beauty industry by launching with 40 shades and continuing to extend their lines. Afterward, brands such as Morphe and Pur continued the standard that Fenty Beauty set, launching 60 and 100 shades respectively.

However, there are still several facets to consider about this – the sheer number of foundation shades just isn’t enough. For one, the Morphe foundation, although it launched with several shades, faced a lot of backlash because many of the shades had unreasonable undertones, were unusable, and these problems only persisted on the dark side of the spectrum. In addition, companies such as Beauty Blender launched foundations with upwards of 30 shades- but the majority of these were just variations on beige and there were only a few darker shades. So, even when companies do put out large numbers of shades, they fail to include undertones and ratios for people of darker complexions- implying that, yet again, they’re only afterthoughts.

“In South Asia, only a scant amount of shades of foundation are offered at stores completely disregarding the darker skin tones,” explains junior Rasagna Vuppala.

All of the brands and products mentioned earlier were higher-end, more Sephora level makeup lines. And even though they are making strides in the right direction, drugstores are even worse off. Drugstores are an affordable way for many people to get their makeup, yet drugstore brands often never have dark shades in the first place, or refuse to keep them stocked in stores. To test this theory, we did some research at both our local CVS and several popular drugstore brands’ websites, and we found that even when brands do cater to darker skin tones, they are almost never in the store. This leaves people of color guessing online and oftentimes having to pay extra for shipping or purchasing several shades as a contingency, defeating the purpose of shopping at drugstores in the first place.

The South Indian community faces some of these challenges through their media and representation. The actors and actresses in the South Indian film industry are all incredibly light-skinned and don’t accurately portray the wonderful shade range of South Indian girls. What’s more, is most South Indian actresses aren’t even South Indian to begin with. Out of the top ten actresses on IMDb’s list of South Indian actresses, four are from North India and all ten are incredibly light-skinned. Tamanna Bhatia, who is 7th on the IMDb list and from North India, is revered for her light skin as seen with her nickname “Milk Beauty”. Another example of the South Indian film industry perpetuating the idea that lighter is better is famous Telugu actors Krishna and his son Mahesh Babu. In almost every movie, Mahesh Babu has lines comparing the color of his skin to his co-stars. These are the movies children watch. This is the kind of media they’re subjected to.

“I also remember seeing a movie about this specific topic, the lead actress (in the movie) was hated because she had a dark skin tone,” recalled Madhumitha Reddy.
Health Consequences
Not only does Colorism put a dent in the wallets of Indian women and poison them from the inside out, it also has severe mental health consequences. Women discriminated against based on the shade of their skin often experience feelings of worthlessness and inferiority. South Asian women with darker skin tend to feel insecure about their bodies and image. This can lead to common mental health issues such as anxiety, depression, and eating disorders. Women that constantly experience discrimination due to the color of their skin, fall into patterns of self-blame and guilt.

Junior Rasagna Vuppala speaks about her own experiences with colorism. “I’ve often heard revolting comments in the past which still come back and haunt me today: ‘she is dark-skinned, but she is still pretty.’ Why does the first part of that sentence even need to be said?” The effects of colorism on mental health are so prominent that it haunts people for years.
Everyday Experiences
We asked several (Asian) students at South to detail their personal experiences with colorism, and it soon became clear that this was a widespread problem regardless of the color of their skin. People on the lighter end of the spectrum tended to see it happen to their friends and family and found themselves on an unwanted pedestal simply due to their skin colors. Others on the deeper end of the spectrum felt suppressed and harmed by people’s preconceived notions of them based on a factor they couldn’t even control.

Conclusion
Women with darker skin are relentlessly judged and ridiculed. We constantly live under the microscope lens of overcritical aunties and jeering peers. “You’re too dark,” they tell us. “Don’t go in the sun,” they tell us. “Use this cream”, “try this powder”, “skin-lightening cream: new and improved formula!” In a world where every advertisement, every company, every country seems to favor lighter skin, where do we fit in? We go to a diverse high school full of equally capable people from a myriad of skin colors. As we look around seeing these shades work in harmony, it hurts to know that this harmony is hard to find in our own culture.

We’re extremely grateful to be Indian and experience the beautiful culture that entails. However, in a world where we see colorism every day, the only way we can be truly proud of our culture is for our culture to be proud of us, no matter our skin, color, or shade.

“I hope our generation is the end to this stigma and hope to see Asian countries rise above this harmful mindset,” expresses Junior Vausdha Mishra. “We need to stop sending the message that fair is lovely, every skin shade is beautiful, the human race is beautiful.”